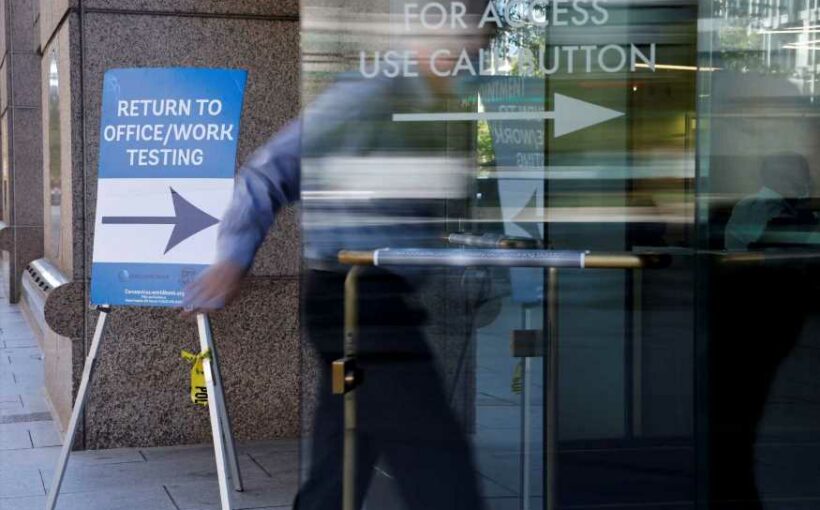 U.S. Covid cases have fallen to less than half of the pandemic’s most recent peak, a sign that the country may be moving past the punishing wave brought on by the delta variant this summer.

The U.S. reported an average of 72,000 new cases per day over the past week, according to data compiled by Johns Hopkins University, down 58% from the most recent high mark of 172,500 average daily cases on Sept. 13. Vaccination rates have also risen in recent months — albeit more slowly than when the shots were first rolled out — to nearly 58% of fully vaccinated Americans as of Thursday, Centers for Disease Control and Prevention data shows.

“Personally, I’m optimistic that this may be one of the last major surges, and the reason for that is because so many people have been vaccinated, and also because a lot of people have had Covid,” said Dr. Arturo Casadevall, chair of molecular microbiology and immunology at the Johns Hopkins Bloomberg School of Public Health. “We now have a lot of immunity in the population.”

Hospitalizations are also falling. About 51,600 Americans are currently hospitalized with Covid, according to a seven-day average of data from the Department of Health and Human Services, roughly half of the 103,000 Covid patients reported at the most recent high point in early September. And while the U.S. is still reporting 1,400 daily Covid deaths, that figure is down 33% from the latest peak of nearly 2,100 deaths per day on Sept. 22.

Case counts have fallen in every U.S. region, most sharply in the South, where the delta wave hit hardest over the summer.

Health experts are still urging caution to a country that they recognize is exhausted by the pandemic. Rising infections in Europe, the possibility of a new variant, and the approaching holiday season are concerns despite the positive trends.

As the pandemic eases in the U.S., global cases are on the rise again after two months of declines, World Health Organization officials said Thursday. Infections in Europe are fueling the worldwide increase, while case totals continue to fall in every other region of WHO member states, data from the organization shows.

Cases worldwide climbed 4% over the week ended Sunday, with almost 3 million new infections reported during that period. Europe alone represented nearly 57% of the total number of new cases, the WHO measured.

That’s concerning for Americans because pandemic trends in the U.S. have often followed those overseas. The delta wave surged in Europe before it took hold in the U.S. this summer, for example.

“A lot of times, what we see in Europe is sort of the harbinger of what we see in the U.S. And so it concerns me that cases there are on the rise,” said Dr. Barbara Taylor, an assistant dean and associate professor of infectious diseases at the University of Texas Health Science Center at San Antonio.

Population-adjusted case counts in Europe including the United Kingdom recently overtook those in the U.S., according to a CNBC analysis of Hopkins data, and are up 14% over the prior week.

Threat of a new variant

Though U.S. case counts are trending downward, they are still elevated, and continued transmission of the virus means there are ongoing opportunities for new variants to emerge.

“The final potential threat or thing that worries us all is the ability of Covid to change and mutate,” said Taylor. The emergence of a new variant “could change everything about the pandemic over the next six months,” she added.

The WHO is monitoring four Covid variants of concern, a list reserved for mutations that are more contagious, more severe or more adept at evading vaccines and other treatments. Delta remains the world’s most dominant variant, and WHO researchers are tracking more than 30 subtypes of the strain, new mutations that haven’t changed enough to be considered individual variants.

Global Covid cases and deaths rise for the first time in two months, WHO says

Some 5% of unvaccinated adults quit their jobs over Covid vaccine mandates, survey shows

The delta plus sublineage is currently gaining traction in the U.K., and some scientists say it could be up to 15% more contagious than delta itself. With two new adaptations to the spike protein that allow the virus to enter the body, 93% of delta plus cases sequenced are in the U.K., WHO reports.

Infectious disease experts told CNBC there isn’t an immediate cause for alarm in the U.S.

“In every single case that you see, there is a finite probability that a new variant will arise. So as long as you have the fire ongoing, it can happen," Casadevall said. "But if you get the numbers lower and lower, the likelihood of it happening is much lower.”

“Can there be another variant that spreads? Of course. Do I think it’s going to happen now? No,” he said.

‘Dark clouds on the horizon’

The upcoming Thanksgiving and Christmas holidays mean more Americans will soon be seeing more of their loved ones and gathering indoors, where the virus spreads more easily. U.S. Covid cases and deaths hit pandemic peaks after the 2020 holiday season, at averages of more than 250,000 infections and 3,400 fatalities per day in January of 2021.

Americans are armed with vaccines this year. Still, “The dark clouds on the horizon are obviously the holidays,” Farber said.

CDC director Dr. Rochelle Walensky recently gave the go-ahead for parents to take their children out for Halloween this year, with some restrictions.

“I wouldn’t gather in large settings outside and do screaming like you’re seeing in those football games if you’re unvaccinated” she said on Fox News Sunday last weekend. “But if you’re spread out doing your trick-or-treating, that should be very safe for your children.”

Walensky advised using “prevention strategies” such as getting vaccinated and spending time outdoors to make the holidays as safe as possible.

It’s hard to project the path of a virus that has been consistently unpredictable. But there is a consensus among experts that Covid will likely transition into an “endemic” virus, meaning that it is not totally eradicated but becomes more manageable and part of the respiratory viruses that the country, and the world, deal with on a yearly basis.

“The way I view this is Covid is here forever, and we’re learning to live with it,” said Farber. “And we can live with it pretty well if we keep it to reasonably low levels and we’re smart about it.”