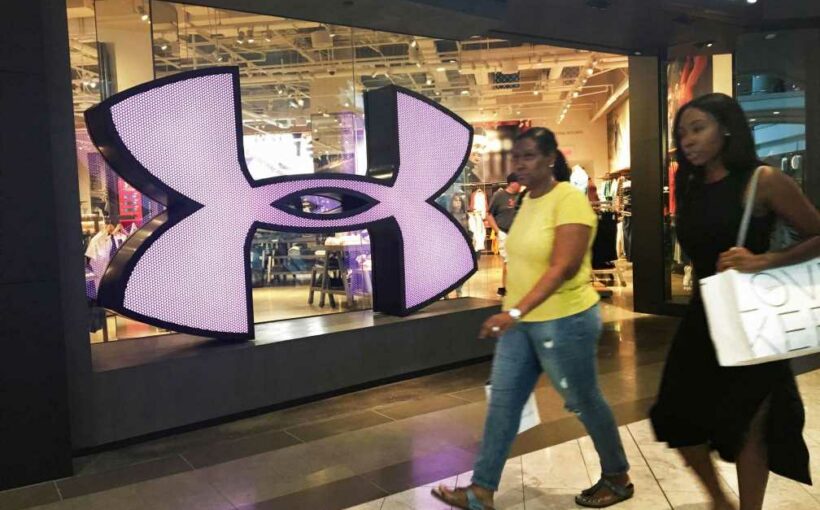 Under Armour on Tuesday raised its sales and profit outlook for the full year, as the sports apparel maker sees demand for its brand roaring back with shoppers returning to its stores.

It reported first-quarter sales growth of 35%, topping analyst expectations. The company is lapping a period a year earlier when its stores were temporarily shut, and Under Armour had to turn to layoffs and other cost-cutting measures to fight through the health crisis.

Its stock jumped more than 3% in premarket trading.

Here's how the company did during its quarter ended March 31 compared with what analysts were anticipating, based on a Refinitiv survey:

Excluding one-time charges, the company earned 16 cents per share, better than the 3 cents that analysts were anticipating, based on Refinitiv estimates.

In North America, sales were up 32%, while they grew 58% in Under Armour's smaller international division, boosted by recoveries in markets that include China.

Online sales rose 69% across the business.

CEO Patrik Frisk said the company is seeing strong demand for the brand, as business rebounds across Asia and North America. In the year-ago period, Under Armour's sales tumbled more than 20%, as its business took a blow from the coronavirus pandemic and its stores were forced shut, freezing its turnaround efforts.

The company has also worked on managing its inventories and reducing its reliance on discounting to get rid of dated merchandise. Frisk said those efforts are paying off and helping to boost profits.

Under Armour said it now expects full-year revenue to rise by a high-teen percentage rate, compared with a previous outlook of a high-single-digit increase. Analysts had been looking for 10.1% growth, according to a Refinitiv survey.

Under Armour said it expects to realize roughly $35 million to $40 million in charges during its second quarter related to its ongoing restructuring.

On Monday, Under Armour said it agreed to pay the Securities and Exchange Commission $9 million to settle charges that it mislead investors from 2015 to 2016 by recording $408 million in sales that it expected to complete in future quarters.

The retailer settled the charges without admitting or denying the findings in the SEC's order. Under Armour had also been responding to requests for documents and information from the U.S. Department of Justice, and said Monday that it hasn't received any requests from the DOJ since the second quarter of 2020.

As of Monday's market close, Under Armour shares are up more about 40% year to date. The company has a market cap of $10 billion.

Find the full earnings press release from Under Armour here.