Home » Business » Woman was searching for safe place to pull over when police rammed, flipped her SUV, lawsuit says 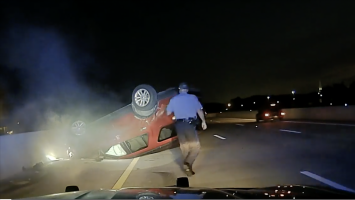 An Arkansas woman says she had no safe place to pull over in July 2020 when a state trooper tried to stop her for speeding, so she turned on her hazard lights and slowed down. Moments later, the officer rammed her vehicle, causing it to flip over and injuring the woman, who was pregnant at the time, according to a May lawsuit.

Dashcam footage obtained by Janice Harper’s attorney shows Harper appeared to slow down and turned on her hazard lights 15 seconds after the trooper initiated a traffic stop. She continued driving for about two minutes, during which time a concrete barrier was visible along the road’s shoulder and no exits are seen.

Two minutes and seven seconds after the police car first turned on its lights, the cruiser bumped the left rear edge of Harper’s vehicle in a Pursuit Intervention Technique (PIT) maneuver, which is often used in police chases, causing her vehicle to swerve across Highway 67/167, hit a barrier and flip upside down.

The video received viral attention in early June and an edited clip has been viewed more than 6 million times.

An Arkansas woman has filed a lawsuit against a state trooper for employing a driving technique that flipped her vehicle over on the road while she was pregnant. (Photo: Screen capture of a video provided by Denton & Zachary, PLLC)

When Dunn initially walked over to her vehicle, Harper told Dunn she didn’t pull over right away because she didn’t perceive it was safe to do so, according to dashboard cam footage.

“Well, this is where you ended up,” Dunn replied.

Harper doubled down on her decision when Dunn insisted she should have pulled over sooner, according to dashboard cam footage.

“I had my flashers on,” Harper said. “I didn’t feel like it was safe.”

The lawsuit lawsuit says the Arkansas Driver License Study Guide tells motorists that hazards can be used to indicate a driver is seeking a safe place to stop when being pulled over by police. Drivers should “pull over to the right side of the road [and] activate your turn signal or emergency flashers to indicate to the officer that you are seeking a safe place to stop”

Watch: 14-year-old girl shot by police after opening fire on them while burglarizing a house

According to Harper’s lawsuit, Johnson and Arkansas State Police had a duty to ensure that Dunn “safely operated his vehicle on interstate highways in a reasonably prudent manner and with the highest degree of care.” Additionally, the lawsuit claims Johnson and the department failed to properly train Dunn regarding the appropriate execution of a “PIT maneuver during a traffic stop.”

Neither Arkansas State Police nor Dunn responded to USA TODAY’s request for comment. Col. Bryant issued a statement via Arkansas State Police, obtained by an NBC affiliate based in Little Rock, Arkansas, defending the use and effectiveness of PIT maneuvers in stopping noncompliant drivers.

“In every case a state trooper has used a PIT maneuver, the fleeing driver could have chosen to end the pursuit by doing what all law-abiding citizens do every day when a police officer turns on the blue lights – they pull over and stop,” the statement reads.

Harper’s pregnancy was not severely impacted by the crash and her baby is now four months old, according to a report from CBS News.