She succeeds Robert Costa at a program best known as the longtime home of the anchor Gwen Ifill. 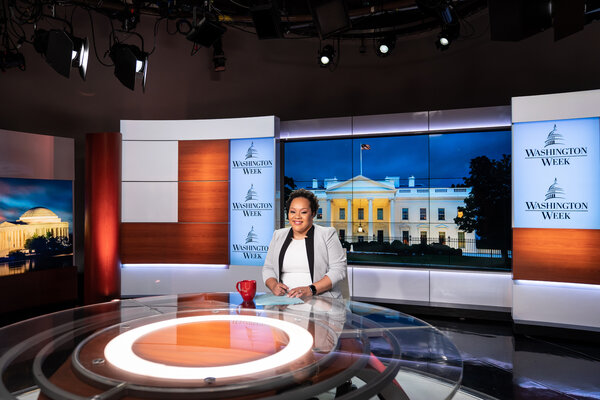 Last month, when Yamiche Alcindor learned she would become the next moderator of the PBS current-affairs show “Washington Week,” she immediately felt the emotion of the moment.

“Washington Week,” a calm redoubt in the shouty battleground of political television, is most closely associated with its longtime moderator Gwen Ifill, the pioneering journalist who broke barriers as a Black woman in the Washington press corps.

Before her death in 2016, Ms. Ifill also became a mentor to Ms. Alcindor, the White House correspondent at “PBS NewsHour.” Starting with the episode on Friday, Ms. Alcindor, 34, will take Ms. Ifill’s old chair at the helm of “Washington Week.” She succeeds Robert Costa, a reporter for The Washington Post who took over in 2017 and left the show this year.

PBS and WETA-TV, the Washington affiliate that produces the program, announced the appointment of Ms. Alcindor on Tuesday.

“I know how much ‘Washington Week’ meant to Gwen, and how much she put her stamp on the legacy of the show,” Ms. Alcindor, who is Haitian-American, said in an interview. “I also feel this incredible responsibility to think deeply about taking this on and making it a show that people want to watch, that people will feel is living up to its great legacy.”

Ms. Alcindor will continue to cover President Biden for “NewsHour,” while also staying on as a contributor to NBC News and MSNBC. Previously, she was a reporter for The New York Times and USA Today.

She said that she had been a “Washington Week” viewer since college, and that she wanted to widen the scope of a show sometimes steeped in D.C. arcana. She also plans to maintain the civil tone — “a sense of respect and respectability,” as she put it — that has been the show’s signature since its 1967 debut.

“There can be this sense, when you are working and living in Washington, that everything is about what’s going on in D.C.,” Ms. Alcindor said. “So much of what has guided my journalism is, how are vulnerable populations being impacted by these policies? That will be my guiding light.”

As a White House reporter, Ms. Alcindor gained some fame as a frequent target of former President Donald J. Trump’s ire at news conferences. On one occasion in 2018, Mr. Trump labeled her question as “racist” after she asked if his policies had emboldened white nationalists. “As a Black woman, it wasn’t the first time that someone had targeted me or said something about me that I knew not to be true,” Ms. Alcindor recalled.

When Ms. Alcindor was first booked as a guest on NBC’s “Meet the Press,” she said, she called Ms. Ifill “in a panic.”

She recalled Ms. Ifill’s advice: “She basically told me, ‘You are a reporter who knows just as much as the people around that table. You earned this, and you are ready for this.’”