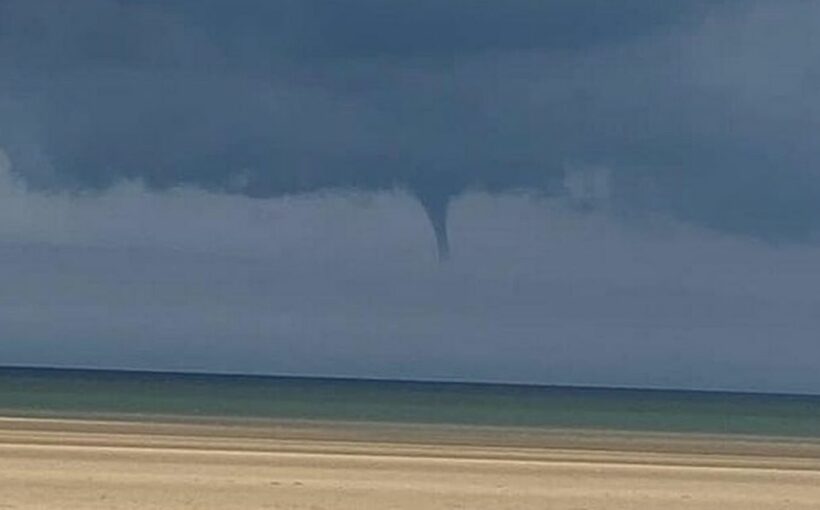 Stunned beachgoers have described a terrifying tornado that suddenly appeared over a coastal bay.

The twister was pictured over Anglesey as several onlookers captured the huge funnel cloud on camera.

Islanders were shocked to see the rare 15-minute vortex moving through the sky over the coast at around 11am on Saturday.

Steve Naylor from Stoke-on-Trent, who was staying at his caravan in Benllech over the weekend, was in Red Wharf Bay when he witnessed the cloud form in the distance.

He told North Wales Live: “We were just sitting down having a coffee and all of a sudden, I saw this cloud and then about six or seven other people (did).

“I didn’t know what it was at the time, I thought it may have been a tornado or a water spout.

“So I got my phone out and got a photo.”

He later published the picture on the "Anglesey Socialmedia Group" Facebook page, with a number of others who also witnessed the phenomenon sharing their images on his post.

Mr Naylor said the weather was “glorious” at the time, despite dark clouds forming in the distance.

“It was really sunny where we were, people were in T-shirts, and it just appeared in the distance out at sea where the clouds were really dark,” he added.

“It just stayed in the air and after about 15 minutes it just started going back up into the cloud and disappeared.

“It was fascinating to see, I’ve never seen one before in my life – but had it come closer I might have been a bit scared.”

As the funnel cloud did not reach the ground, it did not officially become a tornado.

According to the Met Office, a funnel cloud is formed when a rotating column of wind draws in cloud droplets, making a region of intense low pressure visible.

It happens when strong inflowing winds intensify, and the spin rate increases as the vortex stretches vertically.

If it continues stretching and intensifying for long enough, the vortex touches the ground, at which point it becomes classified as a tornado.

When a tornado moves across the surface, it can cause severe damage or destruction to objects in its path.

Mike Shaw from Manchester was driving towards the beach at Llanddona with his partner when he also spotted the cloud.

“We were driving on the straight road to Llanddona for a coastal walk, I always have my camera,” he said.

“It looked like a twister so pulled up and got my camera out of the boot.

“We were about three miles from the coast at the time.

“We saw it for about five minutes but it disappeared below the hill on my photo, and by the time we got to the beach down the single track winding road, it had gone – I wish we had been on the beach 10 minutes earlier, I would have liked to have got a shot from the beach.”