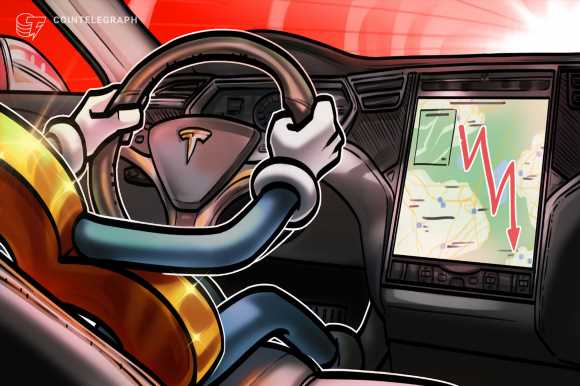 Electric vehicle maker Tesla sold most of its Bitcoin (BTC) holdings in the second quarter, according to new financial disclosures released on Wednesday.

“As of the end of Q2, we have converted approximately 75% of our Bitcoin purchases into fiat currency,” Tesla said in its quarterly statement. “Conversions in Q2 added $936M of cash to our balance sheet.”

According to the financial statements, Tesla’s net digital asset holdings were relatively stable for three consecutive quarters. By the end of March, Tesla had $1.261 billion worth of digital assets on its books. Following the liquidation, the firm now has $218 million in digital asset exposure.

As Cointelegraph reported, the electric vehicle maker sold a portion of its BTC reserves in March 2021, realizing a net profit of $128 million. At the time, CEO Elon Musk explained that the sale, which amounted to 10% of Tesla’s holdings, was to “prove liquidity of Bitcoin as an alternative to holding cash on balance sheet.”

Just two months prior, in January, Tesla became one of the largest corporate holders of Bitcoin after it bought $1.5 billion worth of the digital asset. The purchase was disclosed in a February filing with the United States Securities and Exchange Commission, or SEC.

This story is still in development.