Home » Crypto » Will The MEME Craze Ever Return Back In The Crypto Space?? 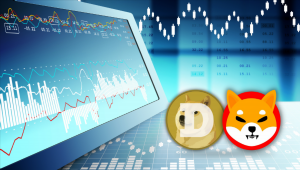 The year 2021 emerged as the beginning of a new phase. With the sudden and unimaginable jump in dogecoin price, other meme coins also came into existence. The DOGE price surged more than 10,000% in just a couple of months. Later in a very small time, many meme tokens attracted many traders who influx huge liquidity too.

As Dogecoin price gained immense popularity, a tough competitor called itself ‘Dogecoin Killer’ Shiba Inu came into existence. This SHIB price exploded in every market within no time but very quickly it also dropped with a huge margin. But the craze for the token still remained at the peak as the volume for most of the token remained notably high.

And hence many new traders just jumped in the moving train just to grab some tokens before the bull run flips. And in the due course, some did buy at the peak and they still wait for the price to regain bullish momentum. However, the meme tokens appear to have made some noise only for a short- time. It would be rather very interesting to know if these tokens would regain their lost glory.

Also Read: The Rise of NFTS This Winter! NFTS Will Bring Warmth to Your Portfolios

According to Coinmarketcap, there are nearly 124 meme tokens with a combined market capitalization of nearly $30 million. The trading volume of the entire meme tokens is just above $1 billion. And hence this could indicate the reduced interest of the traders in the meme space.

Dogecoin received immense attention from big personalities and moreover, many of them actually bought it. The asset just spiked like a monster when it received constant support from Tesla CEO Elon Musk. But to be precise, the asset just fell apart and was trending within a narrow region. However, the token is attempting very hard to regain entry into the top 10 and with another push the asset can finally make it.

This particular meme token created an enormous buzz in the crypto space in a very short time frame. Many people started accumulating billions of SHIB tokens with a dream of becoming a billionaire one day. Yet the token does attempt to kill a zero during each bull run, yet has failed each time.

Probably the ongoing narrow trend of the crypto space might have kept the traders away from the space a little. But when the bull run resumes, the complete focus of the traders and the institutional investors would be on mainly Bitcoin and the major altcoins. However, DeFi tokens may also gain some attention, but it’s pretty hard to say how much attention these meme tokens would receive.

Also Read: DyDx Price Continues To Climb New Highs, But Why It Is Surging?