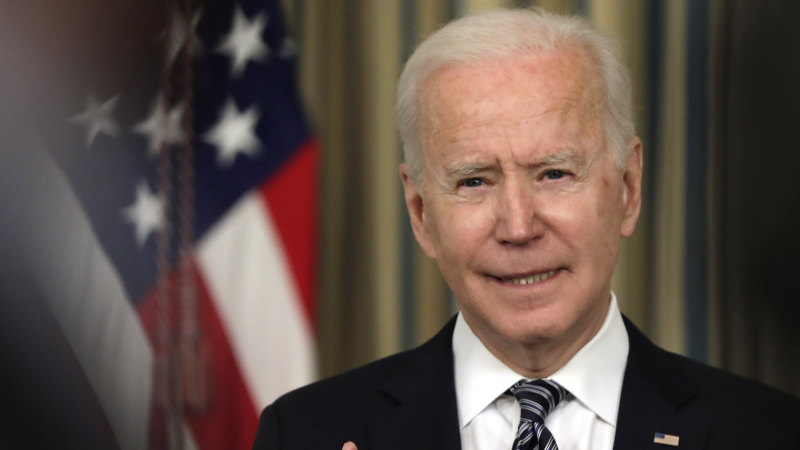 “Sleepy Joe” may turn out to be one of the most energetic, reformist and progressive US presidents in modern history if Joe Biden’s administration can follow up its $US1.9 trillion ($2.5 trillion) stimulus package with a $US3 trillion “infrastructure” spending program.

The administration is in the final stages of putting that plan together and it is apparent that it is far more than a plan to upgrade America’s degraded infrastructure. 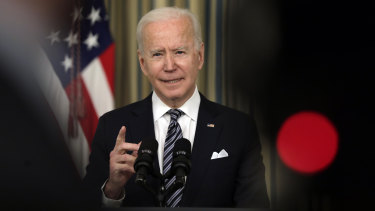 Joe Biden could be marking himself as one of the most energetic, reformist and progressive US presidents in modern history with his spending spree.Credit:Bloomberg

Republican Senate leader Mitch McConnell may have accurately described the Democrat’s plans as a “Trojan Horse” for a raft of progressive policies, including massive tax increases.

It is clear that the program will include tax increases because Biden has said that, unlike the stimulus spending, the infrastructure program will be funded.

During the election campaign he proposed a partial reversal of Donald Trump’s $US2 trillion of tax cuts for companies and wealthy individuals.

Trump cut the corporate tax rate from 35 per cent to 21 per cent; Biden proposed lifting it to 28 per cent. Trump reduced the top rate for individuals from just under 40 per cent to 37 per cent; Biden proposed restoring the former rate for those earnings more than $US400,000 while removing a range of tax breaks for the wealthy and taxing some capital gains as income. Minimum tax rates for US multi-national companies are another element that is being considered.

The prospect of those tax hikes would normally unsettle financial markets – on some estimates the corporate tax increase could reduce the S&P 500 companies’ earnings per share by nearly 10 per cent – but the combination of the stimulus package and the big new spending splurge the tax increases would help fund are helping to offset and muffle those concerns.

The spending does appear to include some conventional infrastructure investment – spending on roads, rail, bridges, ports and broadband infrastructure.

There’s also expected to be, however, a big spend on “green” energy, including a national network of electric vehicle charging stations and solar and wind generation as well as training programs for workers, free community colleges, universal day care and national paid leave among other social programs.

Both the likely tax package and the spending it will probably only partly fund are, in US terms, radical.

The tax increases would be the first substantial reform of the US tax system since Bill Clinton’s administration in 1993 while the “infrastructure” spending has a whiff of Roosevelt’s “New Deal” response to the Great Depression about it.

The Biden plan is progressive and does go beyond an attempt to modernise America’s physical infrastructure to addressing climate change, its social infrastructure and social and economic inequality.

The administration is moving with urgency because it knows that there is a real risk the Democrats will lose their paper-thin Senate majority (held only with Vice-President Kamala Harris’ casting vote) in next year’s mid-term elections.

It appears that Biden will try to navigate predictably stiff Republican opposition to the tax increases and the climate-related spending in the plan by splitting the package into two or more pieces. Some Republican support could be expected for the upgrading of America’s existing, decaying, infrastructure.

The administration would then try to use the same budget “reconciliation” process that it adopted for is stimulus spending for the rest of the package.

That would require “only” a simple majority in the Senate, although that’s not straightforward given that some of the more centrist Democrat senators are likely to have reservations about such a big and radical tax-and-spend approach.

The $US3 trillion cost estimate (over a decade) may be conservative. If the administration were to pursue its agenda aggressively, rather than compromising some elements to appease the moderates in its own party, the bill could top $US4 trillion.

It is unlikely that the proposed tax increase would fully fund a $US3 trillion program, let alone $US4 trillion, which would necessitate some significant debt funding during a period when the US Treasury is already confronting record funding requirements.

Federal debt increased by more than 20 per cent last year to more than 100 per cent of GDP, before the Biden stimulus spending.

The counter argument is that some of the spending will pay for itself, either by generating income, or through productivity gains, or both. The administration believes the green energy and 5G broadband investments will spark private sector investment and create millions of tax-paying jobs. 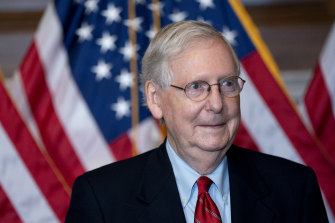 Republican Senate leader Mitch McConnell has described the Biden plan as a “Trojan Horse” for a raft of progressive policies, including massive tax increases.Credit:Bloomberg

It is also the case that there has been no better time in modern history for the government to borrow heavily, with US and global interest rates at negligible levels and long term bond rates in the US close to negative, if not actually negative, in real terms.

The Democrats argue that the plan is an investment in increasing the US economy’s long term growth potential at a time when US economic supremacy is being challenged by China and therefore even if it does increase US debt and deficits it would remain worthwhile.

The Biden plan is progressive and does go beyond an attempt to modernise America’s physical infrastructure to addressing climate change, its social infrastructure and social and economic inequality.

To date, despite its scale and scope, it doesn’t appear to be frightening investors or generating much of a political backlash beyond the Republican party, although that could change as Biden fleshes out the detail.

For the rest of the world, if Biden succeeds in implementing the key elements of the package it would help in alleviating the competitive pressure for corporate tax cuts that the Trump tax cuts fuelled, add massive momentum to efforts to decarbonise the global environment (and to the competition to profit from decarbonisation), probably flow through to higher inflation and interest rates and impact sharemarkets and currencies.

Whatever happened to “Sleepy Joe?”

Start the day with major stories, exclusive coverage and expert opinion from our leading business journalists delivered to your inbox. Sign up here.