Home » World News » ‘More than Trump’: Attacks on Asian-Americans surge along with COVID 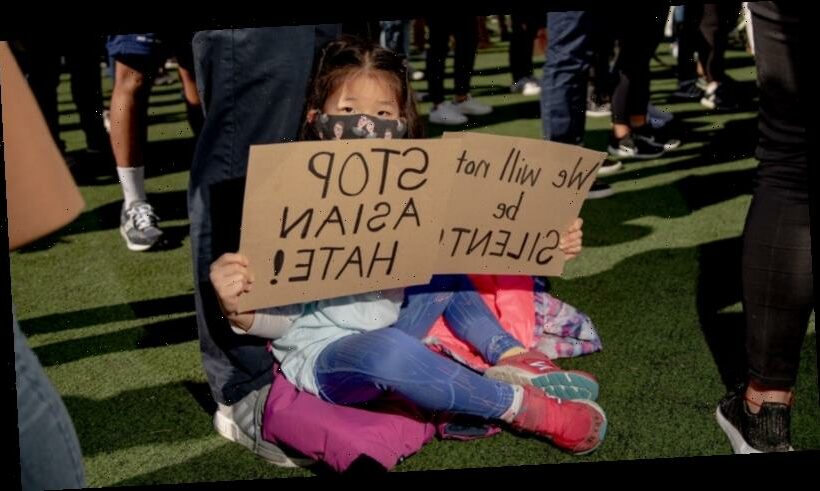 Washington: As the representative for New York’s 40th state assembly district, Ron Kim has seen the rise of anti-Asian harassment and violence up close since the beginning of the COVID-19 pandemic.

Kim’s district includes Flushing, a bustling neighbourhood in Queens that is renowned as the home of New York’s most authentic Chinese food. More than six in 10 of his constituents are of Asian heritage, mostly Chinese and Korean.

“Asian-Americans have been shoved and attacked in the downtown area of my district,” says Kim, the only Korean-American ever elected to the New York’s state legislature.

“Walking around the streets or on the subway you feel a lot of tension and anxiety.” 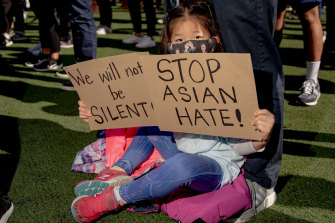 A child holds signs during an AAPI Rally Against Hate in New York on Sunday.Credit:Bloomberg

When Americans began feeling concerned about the coronavirus last February, New York Mayor Bill de Blasio headed to a Chinese restaurant in Flushing to show his support for the Asian-American community.

Restaurants in the area were already reporting a drop-off in customers because of misguided fears that people could catch the virus from Chinese cooking.

De Blasio would later be ridiculed for encouraging people to gather in restaurants just as the virus was beginning to spread throughout the country. 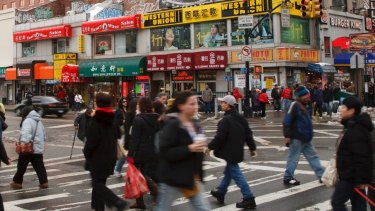 New York – home to large Asian-American communities in neighbourhoods like Flushing – has seen a spike in hate incidents since the pandemic began.Credit:Will Steacy

But he was right to be worried about growing discrimination against Asian-Americans. Former president Donald Trump did not help by calling COVID-19 the “China virus” and the “kung flu”.

The Stop Asian and Pacific Islander Hate group released a report last week showing it had recorded 3800 anti-Asian hate incidents over the past year. The vast majority of the reported incidents were verbal harassment and shunning, but there were also hundreds of reports of physical violence.

The biggest spike occurred in New York City, which prides itself on being a progressive and multicultural melting pot. The attacks have continued even as coronavirus cases and hospitalisations have plummeted over recent months. 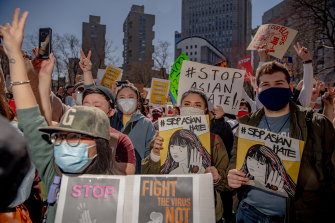 More than 500 of the 3800 hate crimes reported by AAPI came in the first two months of 2021.Credit:Bloomberg

In February there were four attacks against Asian-American women in New York on a single day. Two women were attacked on subways; one was pepper-sprayed while walking down the street; another was shoved to the ground.

The owner of Xian Famous Foods, a popular New York chain serving western Chinese noodles and dumplings, revealed in February that he had started closing earlier so his staff members could get home safely. Two of Jason Wang’s employees were punched in the face in unprovoked attacks — something he said had never occurred before the pandemic.

Yet until recently, the rise in hate crimes against Asian-Americans had received relatively little attention. The issue was eclipsed last year by the Black Lives Matter protests following George Floyd’s death in Minneapolis. 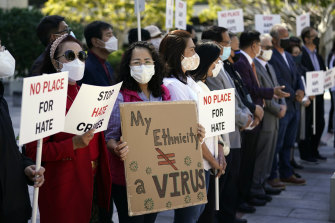 Demonstrators hold signs during a press conference calling to a halt on violence against Asian Americans in Los Angeles on Monday.Credit:AP

That changed last week when a white man shot dead six Asian women working in massage parlours in Atlanta, Georgia. The shootings helped drive protesters across the country to rally in solidarity with Asian-Americans over the weekend. Grey’s Anatomy actress Sandra Oh attended a rally in Philadelphia where she urged Asian American protesters to chant: “I am proud to be Asian! I belong here!”

Kim says the shootings in Atlanta are an imperfect example of the broader phenomenon of anti-Asian attacks. The shooter, a white evangelical Christian, has denied that race was a motivating factor in the attacks, telling police he was driven to kill by a sense of shame about his addiction to sex.

Kim adds that anti-Asian attacks in his district have often been carried out by members of other minority communities, complicating the racial dynamics of the issue.

“We have a lot of work to do to let people in these communities know that Asian Americans are not the ones that caused their grief and their economic distress.

As much as he disliked Trump’s inflammatory “China virus” rhetoric, the Democrat says it’s too easy to heap all the blame on the former president.

“We can’t just put on a band-aid, blame Trump and call it a day,” Kim says. “That’s not good enough.”

Speaking at the first congressional hearing into anti-Asian hate crimes in three decades last week, historian Erika Lee said the recent upsurge could not be dismissed as “random acts perpetrated by deranged individuals”.

“They are an expression of our country’s long history of systemic racism targeting Asian Americans and Pacific Islanders,” she said, pointing to the lynchings of Chinese-Americans in the 19th century and the internment of Japanese-Americans during World War II.

“We’ve heard in the past 24 hours many describe anti-Asian discrimination and racial violence as un-American. Unfortunately, it is very American.”

What in the World

A note direct from our foreign correspondents about what’s making headlines around the world. Sign up for our weekly newsletter here.