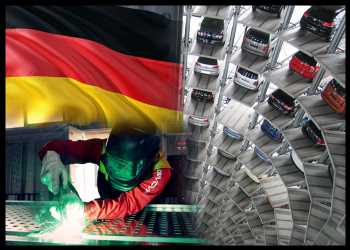 Industrial production dropped 1.1 percent on a monthly basis, but slower than the revised 3.5 percent decline seen in August. Economists had forecast a monthly growth of 1 percent.

On a yearly basis, retail sales fell 1 percent, in contrast to the 2.2 percent increase in August.

The economy ministry said the supply bottlenecks for raw materials and intermediate products have persisted for a long time and that is reflected on a broader front.

Business surveys suggest that shortages of components, particularly in the auto sector, will keep manufacturing very weak during the fourth quarter, and the outlook for early 2022 is not looking much better, Andrew Kenningham, an economist at Capital Economics, said.

Although there have recently been some rays of hope, a sweeping turnaround is not to be expected for the time being, with the result that manufacturing will once again make little contribution to economic growth in the fourth quarter, Ralph Solveen, a senior economist at Commerzbank, said.

Within industry, capital goods output showed a decrease of 2.8 percent and the production of intermediate goods was down 1.1 percent.

There was an increase of 2.1 percent in the manufacture of motor vehicles, trailers and semi-trailers. At the same time, consumer goods output gained 0.2 percent in September.

Energy production was up 1.0 percent and the production in construction moved up 1.1 percent.