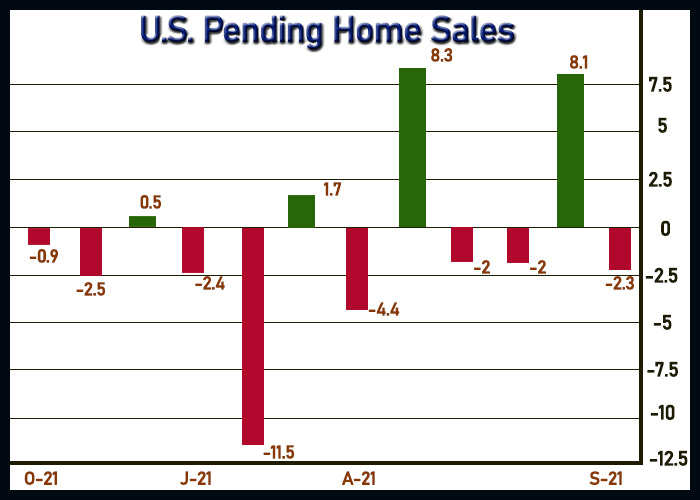 Pending home sales in the U.S. showed a notable pullback in the month of September after spiking in August, according to a report released by the National Association of Realtors on Thursday.

A pending home sale is one in which a contract was signed but not yet closed. Normally, it takes four to six weeks to close a contracted sale.

With the monthly decrease, pending home sales in September were down by 8.0 percent compared to the same month a year ago.

“Contract transactions slowed a bit in September and are showing signs of a calmer home price trend, as the market is running comfortably ahead of pre-pandemic activity,” said NAR chief economist Lawrence Yun.

He added, “It’s worth noting that there will be less inventory until the end of the year compared to the summer months, which happens nearly every year.”

The sharp pullback in the month of September reflected decreases in pending home sales in all four regions of the country.

While housing supply currently remains at low levels, Yun predicted inventory will turn the corner in 2022.

“Rents have been mounting solidly of late, with falling rental vacancy rates,” Yun said. “This could lead to more renters seeking homeownership in order to avoid the rising inflation, so an increase in inventory will be welcomed.”

On Tuesday, the Commerce Department released a separate report showing new home sales in the U.S. skyrocketed in the month of September.

Economists had expected new home sales to jump by 2.7 percent to an annual rate of 760,000 from the 740,000 originally reported for the previous month.

Despite the much stronger than expected monthly growth, new home sales in September were still down by 17.6 percent compared to the same month a year ago.