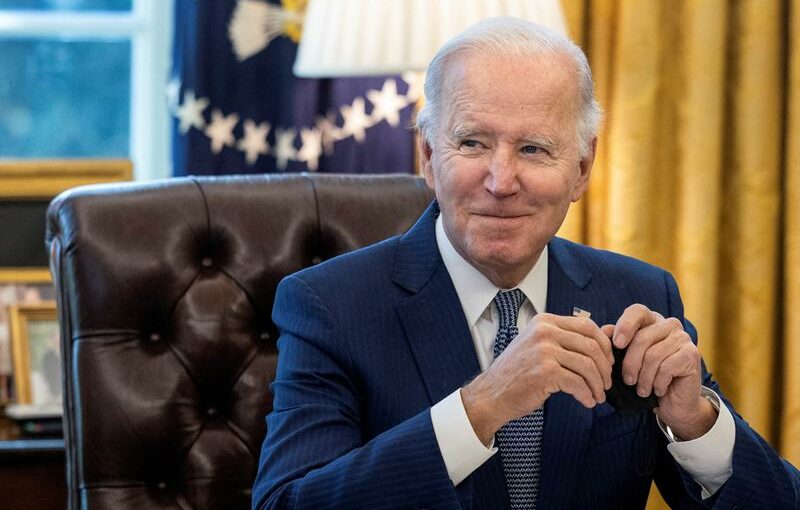 WASHINGTON (Reuters) – Having averted an embarrassing government shutdown and potentially catastrophic default this month, Democrats in the U.S. Congress now move on to the even harder task of passing President Joe Biden’s $1.75 trillion domestic investment bill.

U.S. President Joe Biden smiles after signing an executive order intended to reduce bureaucracy around government services for the public, in the Oval Office at the White House in Washington, U.S., December 13, 2021. REUTERS/Evelyn Hockstein

After months of intraparty dickering, moderate Democratic Senator Joe Manchin was withholding his support for the sweeping bill that would expand social programs and invest in technology to battle climate change, complicating Senate Majority Leader Chuck Schumer’s goal of approving it before Christmas just 10 days away.

“The president’s been speaking with Senator Manchin and I look forward to hearing about further progress,” Schumer said on Tuesday, refusing to retreat from his timetable but not guaranteeing success.

But with no votes to spare in passing Biden’s “Build Back Better” (BBB) initiative amid solid Republican opposition, Schumer now faces his biggest challenge since becoming majority leader in January. He is feeling the heat from all sides.

His top lieutenant, Senator Dick Durbin, has been clamoring for a showdown that would force Manchin to either fall into line and vote for the bill or defy Biden in a way that could severely damage his presidency and Manchin’s own party.

Asked whether Schumer should schedule votes on Build Back Better without nailing down victory, Durbin said: “It’s always a risk,” adding: “Many people will sit on the fence as long as possible. There comes a time when you’ve got to say … put up or shut up.”

“If we get it done before Christmas, great. If it goes into New Year’s, that’s fine,” Senator Jon Tester told reporters.

Such flexibility infuriates liberals, who have already swallowed a raft of compromises amid a promise of quick action if they helped pass a separate, $1 trillion, bipartisan road and bridge-building infrastructure bill, which they did.

“The agreement from the beginning was that it was one deal,” Senator Elizabeth Warren, a leading progressive, told reporters. “And yet we seem to be having trouble pulling the BBB part across the finish line.”

Schumer’s predicament is similar to what Democrats faced over a decade ago when, without Republican support, they struggled to enact the Affordable Care Act, better known as Obamacare, which promised to make health insurance affordable to millions of Americans.

It finally passed in an election year and became the landmark achievement of Barack Obama’s presidency, just as Build Back Better could be for Biden.

Some political observers think Biden can afford to wait until early next year, maybe into January or February, to secure a victory. After that, lawmakers’ attention will turn almost exclusively to the Nov. 8 congressional elections.

But a delay has pitfalls as it gives individual Democratic senators time to mull more ways for changing the legislation and more time for House Democrats – both liberals and moderates – to complain about any emerging compromise.

The interrelated issues of the economy and the COVID-19 pandemic will be the top campaign issues, former Senate Democratic aide Jim Manley predicted. But he added: “For Democrats who want to run on a positive agenda, the failure to deliver here is going to be very damaging.”

A middle ground, he added, could see negotiators “continue to slim down the package under the belief the progressives will take whatever the Senate sends over.”

As the waning days of the 2021 session of Congress tick down, the Senate parliamentarian still must rule on whether a raft of provisions in Build Back Better, including a major reform of immigration policy, adhere to Senate rules.

The final version of the legislation must then be written and signed off on by the 50-member Senate Democratic caucus.

It is a gargantuan task to achieve over few days, as Republicans sit on the sidelines cheering for failure.

“The smart ones over there realize this can’t and shouldn’t happen before the Christmas holidays and we’ll just see how long it takes for leadership to come to the same conclusion,” he added.