Home » Markets » China is grappling with a ‘devil’s bargain’

The debt-riddled underbelly of some of China’s bigger companies perhaps provides another layer of insight into Xi Jinping’s abrupt imposition of a new and aggressive approach to “common prosperity” on the country’s biggest enterprises.

For decades it was the entrepreneurs who helped turbocharge China’s growth rate, particularly during the ultra-high growth in the decade after the financial crisis where Chinese companies gorged on the torrents of liquidity, the access to cheap debt and the stimulus China poured into its domestic system and economy. 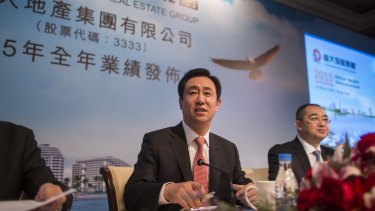 Billionaire Hui Ka Yan is the chairman of one of China’s biggest property developers, Evergrande, which is faltering.Credit:Bloomberg

For a variety of reasons, not the least of which was the flaunting of wealth and perceived power and independence from the state of tech entrepreneurs like Alibaba’s Jack Ma, China’s authorities launched an assault on the big tech companies this year and pressured their billionaire founders to “donate” towards its goal of common prosperity.

That heralded a radical shift, the biggest in 40 years, from an emphasis on creating wealth towards redistributing it.

Before COVID the authorities had been attempting to drain leverage from their financial system and corporate sector – particularly the property sector – an effort that was put on hold while they responded to the pandemic with fiscal and monetary stimulus. Until the Delta strain emerged this year they had been resuming that effort.

This year it has become clearer why the authorities were so focused on deleveraging as the dire financial condition of some of China’s biggest enterprises has been revealed.

HNA, the sprawling conglomerate that was once one of the world’s largest asset buyers (and a former shareholder in Virgin Australia) collapsed into bankruptcy with debts of more than $100 billion at the start of this year after several years of attempts to unwind its debt-fuelled global spending spree. It was placed in state hands last year.

Huarong, set up by the state to manage bad debts within China’s banking system after the Asian financial crisis in the late 1990s, is in the process of being bailed out now by state-owned enterprises after losing about $22 billion last year.

It has about $330 billion of liabilities and, along with the bad debts it was supposed to manage, a disparate collection of businesses and other assets it had acquired in a spending spree well beyond its original mandate. Its chairman, and the architect of its expansion, was found guilty of corruption and executed in January.

There have also been a string of other defaults and threatened defaults among Chinese state-owned and private entities over the past year or so – yields of China’s offshore high-yield bonds have been trading at double-digit levels – but the other “whale” in trouble is one of China’s biggest property developers, China Evergrande.

With most of China’s house wealth tied up in property and Evergrande one of the country’s largest developers its struggles are of national significance and concern. It has been engaged in a firesale of assets that has reduced its debt load from a peak of about $180 billion last year to about $120 billion but it has total liabilities – including trade creditors – of more than three times that amount.

HNA, Huarong and Evergrande are almost certainly the tip of an iceberg, with the continuing attempts by Beijing to deleverage and restructure its largest enterprises an indication of the perceived/real fragility and vulnerability of the corporate sector.

Its warning that it might default on its debt on Tuesday sent shudders through offshore bond markets – its bonds are trading at less than 40 cents in the dollar – where the company has been China’s biggest issuer of junk bonds. More than 40 per cent of its debts fall due within the next 12 months.

The authorities wouldn’t have been taken by surprise. They directed property developers to reduce their leverage and stop issuing new debt last year and called in Evergrande last month to put pressure on the company to stabilised its finances without destabilising financial and property markets.

There has been speculation of a state-led bailout of Evergrande – which underscores its significance within China. 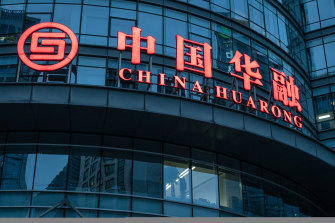 This year it has become clearer why the authorities were so focused on deleveraging as the dire financial condition of some of China’s biggest enterprises has been revealed.Credit:Bloomberg

Despite the interventions in Huarong (where the majority shareholder, the Ministry of Finance, made it almost inevitable) and HNA – the authorities would, however, be reluctant to bail out yet another over-extended group and add to the moral hazard already pervasive in an economy so state-dominated.

HNA, Huarong and Evergrande are almost certainly the tip of an iceberg, with the continuing attempts by Beijing to deleverage and restructure its largest enterprises an indication of the perceived/real fragility and vulnerability of the corporate sector.

The examples of threatening corporate recklessness and ill-discipline, along with the hubris and conspicuous wealth and prospective power of the billionaire tech entrepreneurs – China has more billionaires than any other country – would almost certainly have unsettled the authorities and have contributed to the crackdown on the big tech companies and the shift in broad national strategy from creating wealth with an expectation that it would trickle down to redistributing it.

In the West there is a phrase that encapsulates the dilemma confronting the Chinese authorities in dealing with the likes of HNA, Huarong and Evergrande and which fits neatly with the new emphasis on common prosperity.

“Privatise the profits, socialise the losses” is essentially the devil’s bargain the most indebted of China’s big companies have presented Beijing. That’s a difficult enough proposition to swallow in a free market economy. It’s a near-impossible one within a communist one, even one with a model of “socialism with Chinese characteristics.”

It would seem the authorities have redefined the model, adding a lot more socialism and reducing the “Chinese characteristics.”