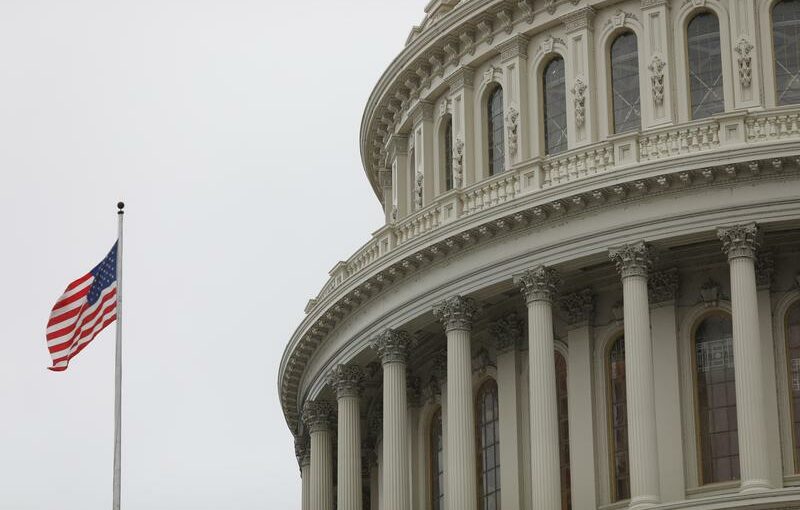 WASHINGTON (Reuters) – The U.S. Congress is poised to lurch into a long and contentious battle over President Joe Biden’s infrastructure investment plan as Democrats and Republicans argue over the $2 trillion cost and how the money should be parceled out in the next several years.

FILE PHOTO: The U.S. Capitol during a morning rainstorm, after Congress agreed to a multi-trillion dollar economic stimulus package created in response to the economic fallout from the COVID-19 Coronavirus, on Capitol Hill in Washington, U.S., March 25, 2020. REUTERS/Tom Brenner

Democrats, who have effective control of the Senate and a slim majority in the House of Representatives, are aiming to deliver a final bill for the Democratic president to sign into law between July 4 and early September.

They say they want Republican buy-in, but have also warned that they will move unilaterally if they cannot make prompt progress.

Biden’s plan, which he will unveil later on Wednesday in Pittsburgh, calls for $2 trillion in new spending on everything from roads and bridges to broadband and elderly care, along with higher corporate taxes.

In 2017, infrastructure investments were seen as a likely achievement of then-President Donald Trump’s administration. But legislation never got off the ground in Congress, in part because of partisan disagreements over funding mechanisms.

This time around, a dizzying array of congressional committees, ranging from House and Senate tax-writing panels to those that oversee health policy, the environment and transportation, are expected to struggle to find consensus.

Negotiations between Democrats and Republicans could get hung up at any point over issues such as how to finance the initiative and whether the massive spending will produce economic benefits or overheat the economy.

Many Republicans are wary of Biden’s infrastructure plan, especially if it is financed with tax increases, and some moderate House Democrats have said they will only support it if there is a bigger write-off for state and local taxes.

And an array of thorny questions, including whether to use the legislation to lower the cost of prescription drugs, could produce delays along the way.

Bill Shuster, a retired Republican congressman who was chairman of the House Transportation and Infrastructure Committee, predicted that elements like green energy and broadband investment could garner bipartisan support.

Some moderate Democrats, who are likely to face difficult challenges from Republicans in the 2022 congressional elections, may balk at the price tag, while progressive Democrats already have made it known that they want double or even triple the money Biden is sketching out.

With the White House hoping that Congress can write and pass the gargantuan bill within the next 12 weeks or so, an early September deadline might be more realistic, according to some current and former lawmakers. That is when a federal highway authorization bill comes due.

Dragging this debate beyond September could only doom the measure as partisanship heats up in the run-up to the 2022 mid-term elections.

Senate Democratic Leader Chuck Schumer discovered during the drive to pass the recent COVID-19 aid bill that he had to engage in plenty of horse-trading in a Senate divided evenly between the two sides, even as he employed a special procedure allowing the measure to advance without the normal 60-vote threshold of support.

Some Democrats already have predicted negotiations with Republicans will flounder, leading Schumer to again go the “reconciliation” route in order to avoid defeat.