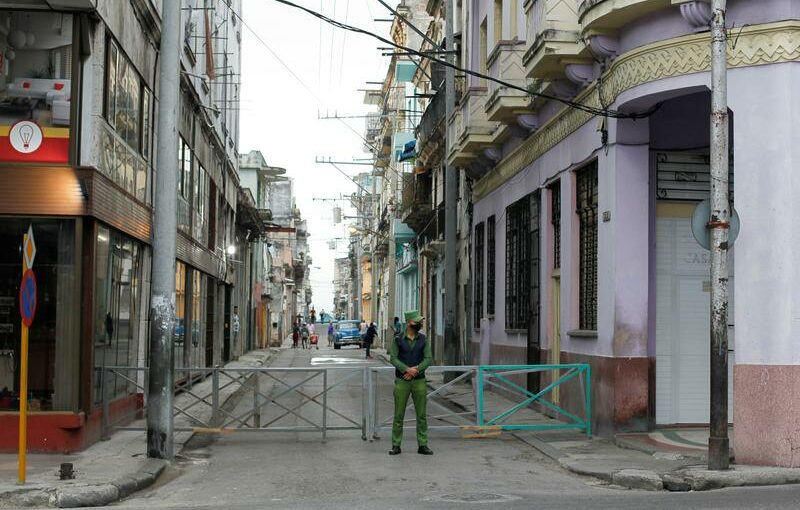 HAVANA (Reuters) – Cuba has begun late stage trials of its most advanced experimental COVID-19 vaccine, edging closer to a potential home-grown inoculation that could help the Caribbean island nation contain infections and ease its economic crisis.

FILE PHOTO: A police officer stands in front of a street in quarantine amid concerns about the spread of the coronavirus disease (COVID-19) in Havana, Cuba, February 1, 2021. REUTERS/Stringer

The country started this week recruiting around 44,000 volunteers in Havana between the ages of 19 and 80 for its randomized, placebo-controlled trial of the two-shot vaccine in which some will receive a third booster shot with another Cuban vaccine candidate.

If the vaccine proves successful, Cuba has said it would inoculate its entire population of 11 million with what would be the first COVID-19 vaccine developed and produced in Latin America.

Cuba said it would also export the vaccine and offer it to tourists. The country has a long history of vaccine exports and medical tourism.

“I feel very happy. I hope this will have a good result, not just in me but in the whole world,” pensioner Maria del Carmen Rodriguez, 83, told Reuters after receiving her first shot at a clinic in Old Havana.

As part of the trial, Rodriguez was not aware of whether she received the vaccine or a placebo.

While Latin American and Caribbean countries are largely competing with richer nations to access limited vaccine supply produced abroad, Cuba has chosen to bet on its own shots even as it faces its worst outbreak since the start of the pandemic.

The daily number of cases has quintupled over the past two months after Cuba opened borders late last year and eased lockdown restrictions.

Late revolutionary leader Fidel Castro oversaw the development of a large biotechnology sector from the 1980s onwards in part to circumvent U.S. sanctions.

Cuba said in January that late stage trials of Soberana 2 would also take place in ally Iran, which is also under U.S. sanctions and dealing with a higher infection rate. nL8N2JK0BS]

The Cuban vaccine, like most of the current coronavirus shots, targets the spike proteins on the outside of the virus that it uses to enter human cells.

The government, which this week announced development of a fifth experimental vaccine intended for people who have recovered from COVID-19, says it aims to vaccinate all inhabitants this year.

This could enable the cash-strapped country to ease lockdown restrictions and in particular kickstart the important tourism sector, providing some relief for an ailing state-run economy smarting under the former Trump administration’s tightening of U.S. sanctions.

Vicente Vérez, director of the state-run Finlay Vaccine Institute that created Soberana 2, said last month the country had the technological capacity to produce around 100 million doses this year, “enough to satisfy internal demand and export it.”

Cuba could also use the vaccine as part of a technology transfer as it has in the past, given a lack of resources on the island that has spawned widespread shortages of medicine.

Neighboring countries like Mexico, Venezuela and Jamaica have already expressed an interest in acquiring Soberana 2 should it succeed.

The large Phase III trial should be complete in November, with final results available in January 2022, according to Cuba’s official registry of clinical trials.

The country has said it expects later this month to launch late stage trials of another homegrown vaccine called Abdala after a poem by 19th century Cuban independence hero Jose Marti.