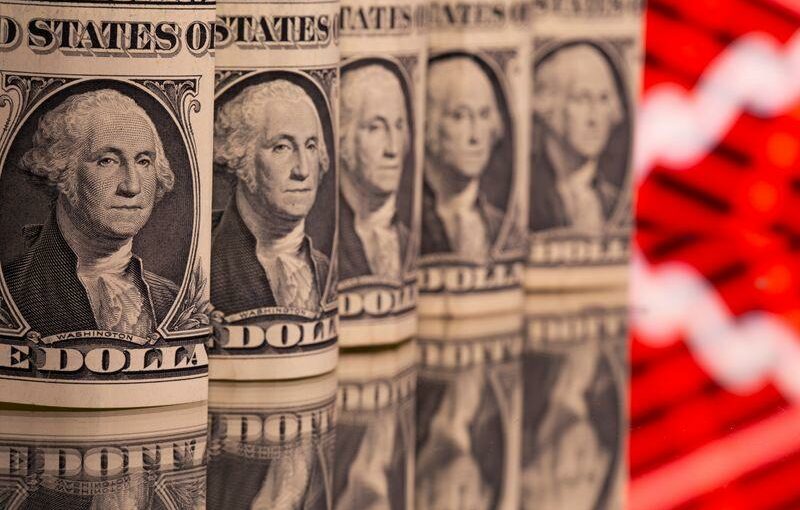 U.S. one dollar banknotes are seen in front of displayed stock graph in this illustration taken February 8, 2021. REUTERS/Dado Ruvic/Illustration

Bitcoin also surpassed $50,000 to a record high as the cryptocurrency continued to gain broader acceptance from companies and investors.

St. Louis Fed President James Bullard said in an interview on CNBC that financial conditions in the United States were “generally good,” and that inflation was likely to heat up this year, something the central bank would take into account.

“The dollar is cutting its losses,” said Joe Manimbo, senior market analyst at Western Union Business Solutions in Washington. “We had … bullish comments from Bullard, and the news on manufacturing is helping to dim the spotlight on lackluster data we saw last week, which was seen as a catalyst for the dollar’s downturn.”

“The economy this week is off to a better start for the greenback.”

Bitcoin breached the $50,000 threshold to touch an all-time high of $50,602, but had last pulled back to $49,280.93. The world’s largest cryptocurrency has risen around 70% so far this year, boosted by Tesla Inc’s announcement that it had bought $1.5 billion in Bitcoin.

The euro reversed its gains against the strengthening dollar and was last down 0.23%. Rising oil prices briefly lifted the Canadian dollar and Norwegian crown to multiweek highs.

The dollar also gained on the safe-haven Japanese yen, which fell through its 200-day moving average against the dollar and struck multiyear lows against the euro, Aussie and Swiss franc.

Sterling reversed its gains against the dollar, and was last down 0.27%, after touching its highest level since April 2018 due to Britain’s vaccine rollout progress.

The risk-sensitive Australian dollar briefly hit a one-month high of $0.7805 and the kiwi touched a five-week peak of $0.7269.