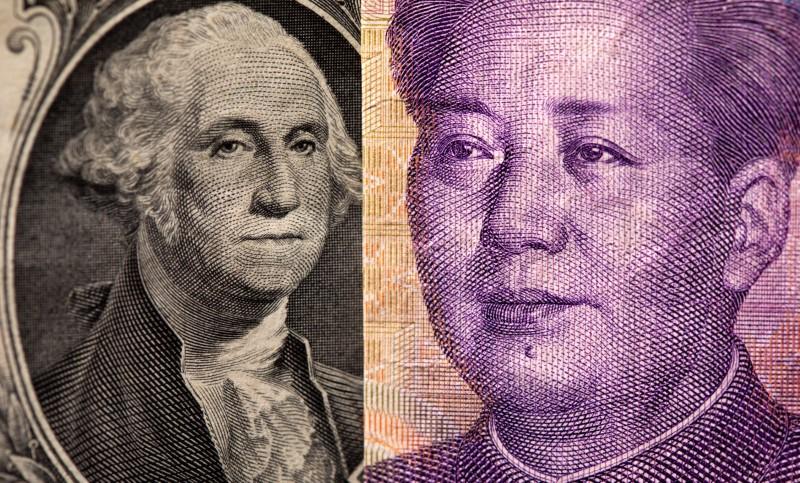 SINGAPORE (Reuters) – The dollar was poised just below this year’s high against the euro on Wednesday and it struck a five-week peak against the yen ahead of U.S. inflation data, with the prospect a strong number could pressure the Federal Reserve to wind back policy support.

FILE PHOTO: U.S. one dollar and Chinese Yuan are seen in this illustration taken May 7, 2021. REUTERS/Dado Ruvic/Illustration

The greenback has enjoyed a lift from last week’s impressive U.S. jobs data and from remarks by Fed officials about tapering bond buying and, eventually, raising rates, sooner than policymakers elsewhere.

The inflation data may determine whether it tests those peaks, with a hot reading likely to stoke hike expectations and provide support, while downside surprise could reel those in.

The yen, which has dropped for five consecutive sessions against the dollar, fell marginally to 110.69 per dollar in early trade, its lowest since mid July. The dollar also touched a two-week high on sterling $1.3820 and held by a one-month high of 0.9234 Swiss francs.

“A stronger than expected print may add modestly to the dollar and (Treasury yields),” analysts at Maybank in Singapore said in a note.

“If the CPI print unexpectedly surprised to the downside, then the pullback in the dollar and Treasury yield may be asymmetrically larger than the upside risks.”

Economists polled by Reuters expect the pace of inflation to have eased slightly in July, with headline consumer prices rising 0.5% for the month compared with 0.9% a month earlier and the annual pace at 5.3%.

Two Federal Reserve officials said on Monday that inflation is already at a level that could satisfy one leg of a test for the beginning of interest rate hikes – though a third, Charles Evans, demurred on Tuesday.

At the same time, investor sentiment is sagging in Europe, with a survey showing a third straight month of deterioration in Germany, as rising global COVID cases keep markets nervous.

“Investors have to take on board the possibility of news on Fed tapering at a time when COVID is still very apparent in various parts of the world,” said Rabobank analyst Jane Foley.

“The consequence of this is likely to be a firmer dollar,” she added, especially if the euro breaches its 2021 low.

Besides the inflation data, which is due at 1230 GMT, a speech at 1600 GMT by Federal Reserve Bank of Kansas City President Esther George will be closely watched, as will the troubling global spread of the Delta coronavirus variant.

South Korea reported a record number of COVID-19 cases on Wednesday, while outbreaks in China, through Southeast Asia and in Australia grow steadily. Hospitals in Texas and Florida are filling up with patients.

The Chinese yuan touched a two-week low in offshore trade, before steadying onshore, while the South Korean won also made a two-week trough. [CNY/][.KS].

A measure of consumer sentiment in Australia slid to a one-year low as lockdowns in major cities weighed, and the Australian dollar slipped a little.

Expectations the Reserve Bank of New Zealand will lift interest rates next week are keeping a floor under the kiwi.

“We are quite bullish on the kiwi,” said Shafali Sachdev, head of FX in Asia at BNP Paribas Wealth Management, who has a 12-month price target of $0.75 for the currency.

“RBNZ seems ahead of the curve…when it comes to hiking and has signalled that quite clearly. This is going to catch up with the kiwi.”