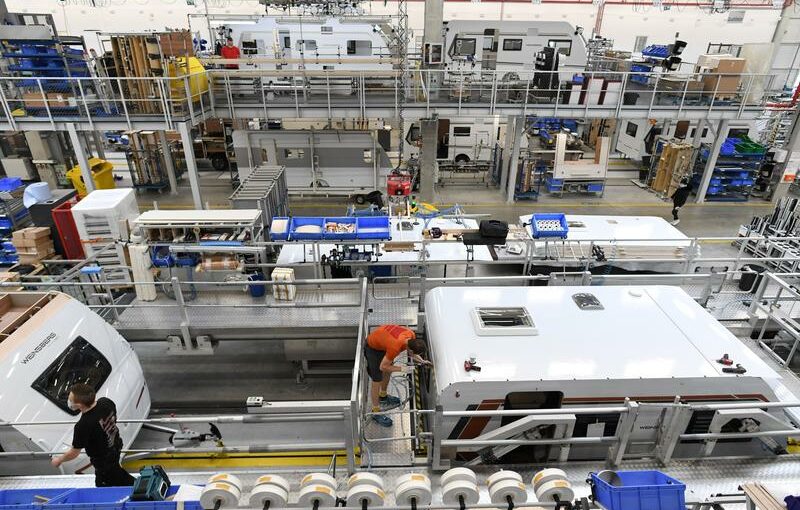 LONDON (Reuters) – Euro zone economic activity made a surprise return to growth this month as factories ramped up production to its fastest pace in over 23 years, offsetting a continuing slowdown in the bloc’s dominant services industry, a preliminary survey showed.

But with much of Europe suffering a third wave of coronavirus infections and renewed lockdown measures, as well as a slow vaccine rollout in the region, the final reading of the survey and April’s numbers could be more subdued.

IHS Markit’s flash composite PMI, seen as a good guide to economic health, bounced above the 50 mark separating growth from contraction to 52.5 in March compared to February’s 48.8, its highest since late 2018.

Even the most optimistic respondent in a Reuters poll had said it would rise to 51.0 and the median predicted only a modest increase to 49.1.

“The service sector remains the economy’s weak spot, but even here the rate of decline moderated in March as companies benefited from the manufacturing sector’s upturn, customers adapted to life during a pandemic and prospects remained relatively upbeat.”

A flash PMI covering the services industry rose to 48.8 from February’s 45.7, still in contractionary territory but its highest reading since August, and well above the median expectation in a Reuters poll for 46.0.

A big jump in input costs led services firms to increase their prices for the first time in just over a year. The output prices index climbed to 50.8 from 48.1.

Any sign of increasing price pressures may be welcomed by the European Central Bank, which has struggled to get inflation anywhere near its target, but a Reuters poll earlier this month suggested the pick-up would be shortlived. [ECILT/EU]

Meanwhile, booming demand for manufactured goods helped the flash factory PMI soar to 62.4 from 57.9, comfortably the highest reading since the survey began in June 1997 and well above all forecasts in a Reuters poll that predicted 57.7.

An index measuring output, which feeds into the composite PMI, jumped to a survey high of 63.0 from 57.6.

The manufacturing upturn was led by a record surge of factory production in Germany, accompanied by the fastest production growth since January 2018 in both France and the region as a whole, IHS Markit noted.

That jump in output came as euro zone factories tried to meet soaring demand, also at a survey high, with the new orders index at 64.2 versus February’s 57.8.

Meanwhile, hopes the vaccine programme would accelerate and allow a return to some sort of normal life, optimism remained elevated. The composite future output index only dipped from February’s three-year high of 67.0 to 66.8.