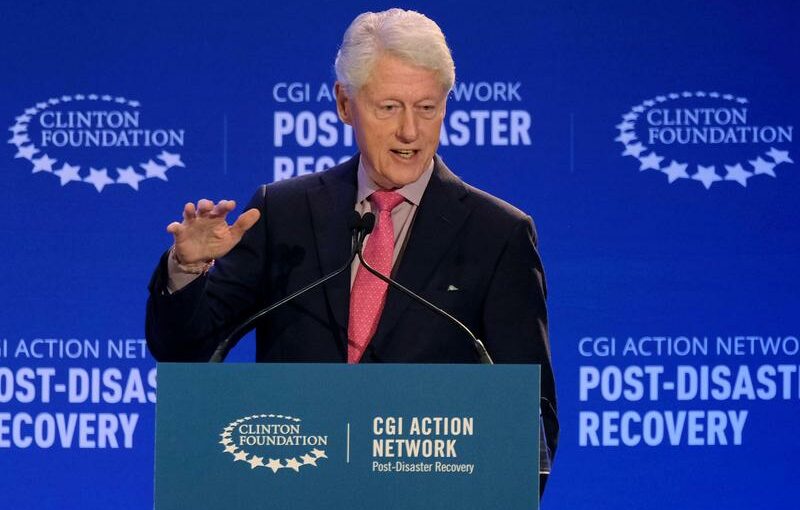 LOS ANGELES (Reuters) -U.S. former President Bill Clinton was in a California hospital on Thursday with an infection and responding well to two days of treatment, his doctors said.

Clinton, 75, was admitted on Tuesday evening to the UCI Medical Center in Irvine “for a non-COVID-19 infection,” Clinton spokesperson Angel Urena. “He is on the mend, in good spirits, and incredibly thankful to the doctors, nurses and staff providing him with excellent care.”

The former president went to the hospital after feeling fatigued and was diagnosed with sepsis, an infection of the bloodstream, which doctors believe started as a urinary tract infection, CNN reported, citing his doctors.

Clinton’s physicians, Alpesh Amin and Lisa Bardack, said in a statement that he was “admitted to the hospital for close monitoring and administered IV antibiotics and fluids.”

“He remains at the hospital for continuous monitoring,” they said. “After two days of treatment, his white blood cell count is trending down and he is responding to antibiotics well.”

They added: “We hope to have him go home soon.”

Clinton, a Democrat who was president from 1993-2001, has had past health issues, including a 2004 quadruple bypass surgery and a 2010 procedure to open a blocked artery in his heart with two stents. CNN reported that Clinton’s current hospital stay is not related to his heart issues.

The former Arkansas governor came to the White House by defeating an incumbent president, Republican George H.W. Bush, and served during a period of acute partisanship in Washington, a harbinger of the current bitter political state.

Clinton endured bruising political battles with Republicans. He was impeached in 1998 by the Republican-led House of Representatives over his sexual relationship with White House intern Monica Lewinsky but remained in office when the Senate acquitted him in 1999.

He is known for a remarkable talent for connecting with people and an exceptional understanding of policy issues, making him an able politician and leader.