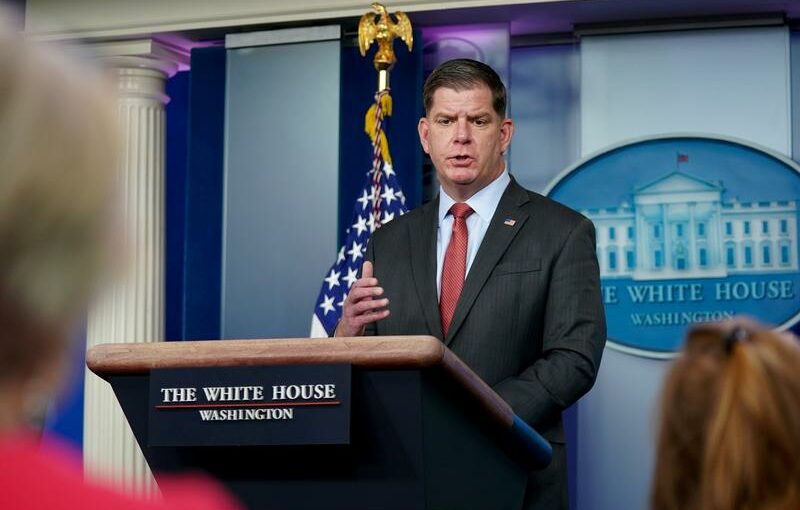 WASHINGTON (Reuters) – A lot of gig workers in the United States should be classified as “employees” who deserve work benefits, President Biden’s labor secretary said on Thursday, suggesting a shift in policy that is likely to raise costs for companies that depend on contractors such as Uber and Lyft.

Labor Secretary Marty Walsh, a son of Irish immigrants and a former union member, has been expected to boost the Biden Administration’s efforts to expand workers’ protections and deliver a win for the country’s organized labor movement.

“We are looking at it but in a lot of cases gig workers should be classified as employees… in some cases they are treated respectfully and in some cases they are not and I think it has to be consistent across the board,” Walsh told Reuters in an interview, expressing his view on the topic for the first time.

“These companies are making profits and revenue and I’m not (going to) begrudge anyone for that because that’s what we are about in America. But we also want to make sure that success trickles down to the worker,” he said.

Shares of Uber fell as much as 8 percent while Lyft dived as much as 12 percent. Doordash fell nearly 9 percent and Grubhub was down 3.3 percent.

Walsh’s work at the Department of Labor is expected to have a major impact on U.S. workplace laws and regulations, including vigorous enforcement of occupational safety and health rules, overtime payments and proper administration of employee benefit plans.

As many as 55 million people in the United States were gig workers – or 34% of the workforce – in 2017, according to the International Labor Organization, and the total was projected to rise to 43% in 2020.

Walsh’s views on the issue could usher in new rulings from the department, which sets legal guidelines for how employers treat workers. Before his appointment, the Labor Department’s Wage and Hour Division proposed rescinding a rule adopted in January that would have made it easier to classify workers as independent contractors.

Walsh said the Department will have conversations with companies that employ gig labor in the coming months to make sure workers have access to consistent wages, sick time, health care and “all of the things that an average employee in America can access.”

The Department’s decision could have far-reaching implications on ride-hailing services such as Uber Inc, Lyft and food delivery apps such as Grubhub Doordash and Postmates.

An Uber spokesman said the United States should be advancing policies to improve independent work and not eliminating it. The company said an overwhelming majority of app-based workers want to stay independent, because it allows them to work when, where and how they want with flexibility no traditional job can match.

A Doordash spokeswoman said “dashers have overwhelmingly told us that they value the flexibility to earn when and how they choose. We’re committed to protecting their independence while providing greater security and benefits.”

Gig workers are independent contractors who perform on-demand services, including as drivers, delivering groceries or providing childcare – and are one-third more likely to be Black or Latino, according to an Edison Research poll.

Walsh also spoke about the risks that result from not having gig companies paying unemployment insurance for such workers – a scenario that has played out during the pandemic, leaving the U.S. government to foot the bill.

“If the federal government didn’t cover the gig economy workers, those workers would not only have lost their job, but they wouldn’t have had any unemployment benefits to keep their family moving forward. We’d have a lot more difficult situation all across the country,” he said.

The last decade has seen a surge in the number of gig workers, indicating broad economic and demographic shifts and raising concerns around long-term financial security for a growing share of the workforce, according to some experts.

Walsh said the labor department’s workplace safety arm, the Occupational Safety & Health Administration (OSHA), is also planning to hire 160 federal inspectors to step up checks and enforcement around the country.

“OSHA, over the last four years has been decimated,” he said.

There are currently has 760 federal inspectors and the latest hiring plan represents a sizable jump at a time when the department has been losing inspectors every year.

OSHA and the Department of Labor have been heavily criticized for applying scant oversight and negligible penalties despite outbreaks of the coronavirus at workplaces such as factories and warehouses around the country.

Walsh is also part of a White House taskforce that was recently set up by President Biden to help promote unions and labor organizing around the country. He said the first taskforce meeting will be in a couple of weeks.

Walsh spoke at length about the work organized labor must do to reintroduce itself to America’s younger generation. He also said the recent push to unionize an Amazon.com Inc. facility in Alabama, which the union did not win, is not a loss for the labor movement.

“The labor movement is like a political campaign. I think the younger generation in America seems to have a new interest in the labor movement,” he said, adding that the Amazon campaign is an opportunity for unions and labor groups to discuss what organized labor is all about.