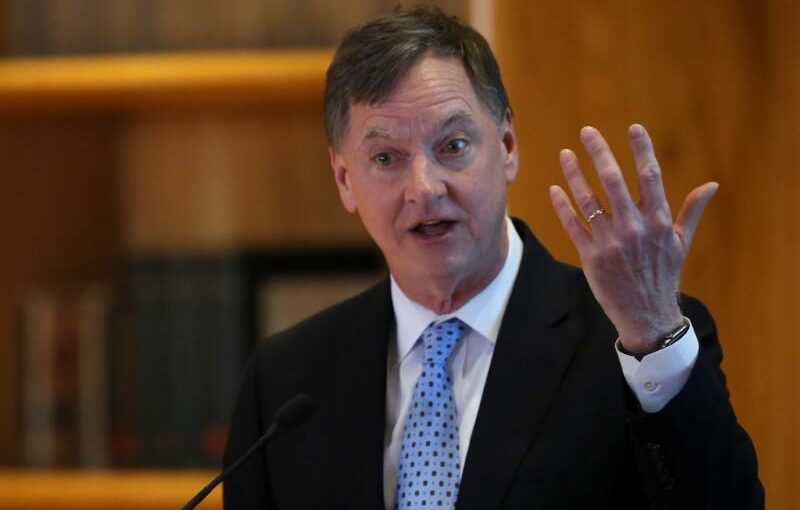 (Reuters) – The current inflation spike shouldn’t push the Federal Reserve to tighten monetary policy prematurely, with more months of labor data needed before any changes as well as more certainty that the pace of price increases will remain above the Fed’s 2% target, Chicago Fed president Charles Evans said on Tuesday.

“We are making progress … We are well on our way,” to the point where it would be appropriate for the Fed to begin trimming its $120 billion in monthly bond purchases and eventually raising interest rates, Evans said in an online meeting with reporters.

The benchmark for that bond “taper” is likely to be met “later this year” based on expected strong continued job growth, Evans said.

But unlike some of his colleagues who argue the Fed should start slowing bond purchases soon, Evans remained among those who feel most strongly that the current surge in prices is temporary, and that the Fed should be aggressive in seeing through its promise of reaching maximum employment.

The debate over when to reset monetary policy for the post-pandemic era has divided Fed officials, and the remaining three policy meetings this year are likely to see that intensify.

A number of policymakers are concerned the current high rate of inflation risks becoming more embedded, and others like Evans feel it will ebb on its own as the economy works through a complex reopening.

Where some are concerned the Fed may be adding to unsustainable asset values with its monthly bond purchases, others feel the recovery is not yet fully complete, and needs the full suite of central bank support a while longer.

Evans said he wanted to see “a few more” monthly employment jobs reports before feeling enough progress had been made to start curtailing the emergency programs put in place to get the economy through the pandemic.

“Everybody is wondering about September, November, December, January,” as possible dates to start trimming the bond purchases, Evans said. “I don’t think that one meeting on either side is going to have an important effect.”

What’s more important, he said, is for the Fed to follow through on the new framework it adopted last year, and prove it is serious about reaching maximum employment and achieving an inflation rate that averages 2% over time – making up for years of inflation that was considered too low.

That will mean some years when inflation is above 2%, and 2021 will count as one.

Inflation measures watched by the Fed are currently running around 3.5% annually, a pace that “really challenges households and businesses. There is no sugar-coating the pain,” Evans said.

But he is also skeptical that will last. While some of his colleagues expect inflation to remain at or above 3% next year, Evans said he projects it will revert to close to 2% – an argument for keeping monetary policy and credit conditions loose.

The Fed has staked its credibility anew on pushing employment higher, and taking risks with allowing higher inflation in the process.

After committing to that goal, “we should not preemptively end a strong improvement in the labor market because somebody is getting nervous about inflation,” Evans said. “I am going to be very regretful if we sort of claim victory on averaging 2% and then find ourselves in 2023 with about a 1.8% inflation rate … That would be a challenge for our long run framework.”

Going forward “employment is going to be good,” Evans said. “Inflation continues to be something that is going to have to behave differently over the next couple of years than it has over the last 10” to warrant rate increases as soon as next year, as some of his colleagues are projecting.