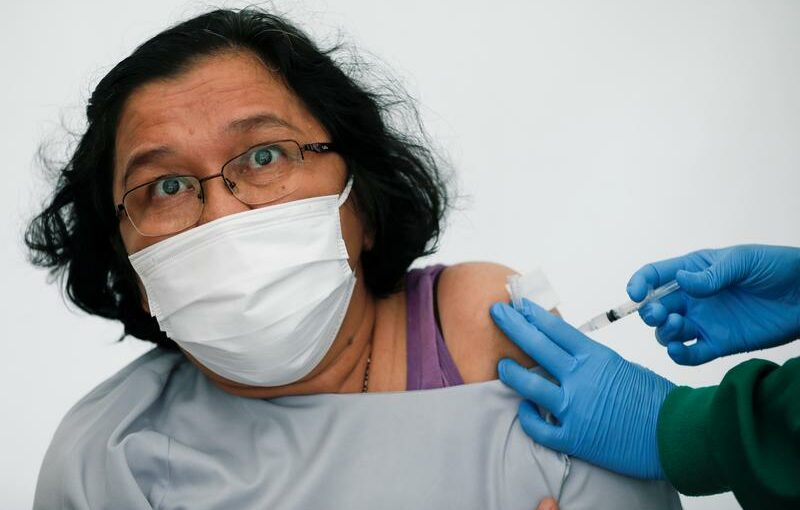 JAKARTA (Reuters) – Indonesia started vaccinating its elderly medical workers against the coronavirus for the first time on Monday, after initial uncertainty over whether seniors would be prioritised in a country battling one of Asia’s worst epidemics.

Indonesia’s food and drug agency recently approved use of the Sinovac Biotech vaccine for the elderly, potentially changing the country’s strategy to focus on the working population.

“I hope that once I am vaccinated I will be safe in my daily life, especially as the rate of the pandemic is going up, not down,” said V.S Ritonga, an 83-year-old pediatrician, after receiving his first shot at a Jakarta health centre.

Indonesia has recorded more than 1.1 million coronavirus infections and 31,000 deaths, among the biggest caseloads in Asia and the most in Southeast Asia.

The deaths include 647 medical workers, according to data from the Indonesian Medical Association, one of the highest rates globally.

As part of phase one of a mass vaccination campaign, Indonesia is hoping to have inoculated nearly 1.5 million medical workers by Feb. 21.

Some 11,000 workers above the age of 60 will be vaccinated, health ministry official Siti Nadia Tarmizi said.

“There were worries that people above 60 couldn’t get vaccinated,” Kamsah Ginting, a bespectacled and masked 60-year-old Jakarta doctor told Reuters. “But now there’s no need to worry.”

In recent months the world’s fourth most populous nation had deliberated on vaccinating people aged between 18-59 only, citing limited data on the safety of the available vaccine for anyone older.

Though a trial in China showed Sinovac’s CoronaVac vaccine could safely trigger an immune response in older participants, the company last week cautioned that its data for the protection rate among the over-60s was limited.

Indonesia has vaccinated more than 814,000 medical workers since Jan. 13, according to health ministry data.