Home » Markets » ‘Not viable’: IFM to stick with oil and gas but dump coal on path to net zero

Infrastructure juggernaut IFM Investors says it will not divest its substantial oil and gas holdings to meet newly detailed climate targets, as it announced plans to phase out thermal coal investments by the end of the decade.

IFM, which is owned by 23 industry superannuation funds, is one of the world’s biggest infrastructure investors and owns substantial oil and gas pipelines in the US. The company announced plans to achieve net zero emissions in its $74 billion infrastructure portfolio, including by fully exiting thermal coal by 2030. 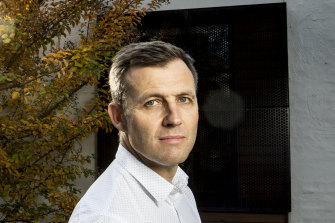 IFM’s global head of infrastructure Kyle Mangini said there is “relatively little debate” on the outlook for thermal coal – an energy source that governments around the world are rejecting in the quest to reduce carbon emissions and transition to renewable energy sources.

“We acknowledge that it is part of the energy mix today but it will be phased out of the energy mix over time, and from that perspective, it’s not a sound long-term investment,” Mr Mangini said. “We put the blanket exclusion on coal really because of the view it’s not viable and that needs to be addressed sooner rather than later.”

Major investment firms have set net zero emissions targets in recent years and are now using either divestment – selling out of carbon-heavy assets- or engagement – remaining invested to advocate for change – to achieve these goals.

IFM’s remaining exposure to thermal coal is limited to the Polish district heating business bought in 2006. But the fund manager owns other carbon-heavy assets including North American oil and gas infrastructure projects Colonial Pipeline and Buckeye Partners. Chief executive David Neal said there were no plans to sell these assets to meet decarbonisation targets.

“We’re really focused on transition rather than divestment,” Mr Neal said. “So what can we do to help the assets in the oil and gas sector at the right time and in the right way transition to support the new cleaner economy? There is a lot of opportunity to do just that.”

“Divestment might get the emissions down in our portfolio but it does absolutely nothing for the planet’s emissions and it certainly does not help the global economy. This is about being a responsible investor.”

IFM’s interim targets include reducing scope one and two emissions (direct emissions and emissions from electricity use) across infrastructure assets by 40 per cent by 2040. This will be achieved, for example, by encouraging its airports and ports to install solar panels or diversify operations to include clean energy projects.

Reducing scope 3 emissions is not part of IFM’s climate plan, which includes indirect emissions like those from airplanes using IFM’s airports or gas passing through IFM’s pipelines. Mr Neal said these were “incredibly important” to understanding long-term risks but were outside IFM’s “direct influence and control”.

“The more people are concerned about the emissions that come from flying, the less airports get used. Those sorts of things,” he said. “There’s a difference here between what we’re worried about and what risks we’re managing.”

The International Energy Agency in May released a report claiming there could be no new oil and gas projects if the world was to achieve net zero emissions by 2050. Mr Neal said retaining its oil and gas assets would “in many cases but not exclusively” rely on the development of new technologies or carbon offsets.

Mr Mangini added the oil and gas sector would play a “really important stabilising role” for the adoption of renewable energy until “storage capability is built into the system more broadly”.

“The fact you can generate [energy] now with a renewable source that is less expensive than fossil fuels means you don’t require government subsidies in many cases is a huge development. Now you have investment being led by the market instead of being led by the government,” he said. “There has been tremendous progress, there is so much RND [research and development] I feel very optimistic we will see a lot more progress.”

Nationals MP George Christensen last week accused the major banks of “caving” to international investor pressure when making decisions to phase out exposure to thermal coal. Mr Neal also rejected any “pressure” from investors and said decarbonisation was rather a collaborative approach to managing investment risk.

“I think we are all on this same journey. Our investors are working through how is their long-term risk being managed? How are the opportunities from this massive energy transition that’s going to occur over the next couple of decades, how are those opportunities being embraced?

“There’s no doubt those engagements are much more intense than they used to be. There’s huge momentum across the investment world in understanding how climate risk can be managed.”

IFM will soon release interim decarbonisation targets for the remainder of its $174 billion portfolio including listed equities, private equity and debt.