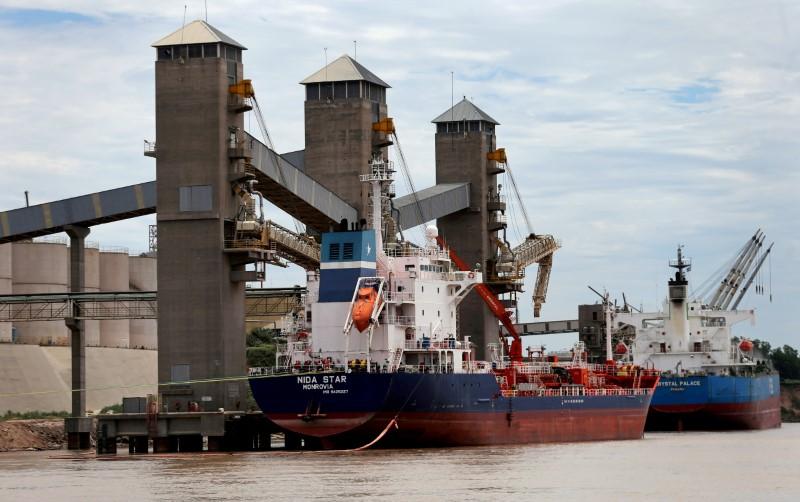 BUENOS AIRES (Reuters) – A once-a-century drought has lowered the water level of Argentina’s main grains transport river, reducing farm exports and boosting logistics costs in a trend that meteorologists said will likely continue into next year.

The South American grains powerhouse is the world’s No. 3 corn supplier and No. 1 exporter of soymeal livestock feed, used to fatten hogs and poultry from Europe to Southeast Asia. Farm exports are Argentina’s main source of hard currency needed to bolster central bank reserves sapped by a three-year recession.

Southern Brazil, source of the Parana River, has been hit by drought for three years. This has reduced water levels in the Argentine ports hub of Rosario, Santa Fe province, where about 80% of the country’s agricultural exports are loaded.

“This is about a once-in-a-hundred-years event. That’s the type of frequency we are looking at,” said Isaac Hankes, a weather analyst at Refinitiv, financial and risk business of Thomson Reuters.

On Monday the United Nations climate panel’s report found that climate change is making extreme weather events more common. One meteorologist told Reuters the situation could “even get worse after the rainy season” set to start in late September.

Ships sailing from Rosario are loading 18% to 25% less cargo than normal due to the shallow water, said Guillermo Wade, manager of Argentina’s Chamber of Port and Maritime Activities.

Logistics costs are rising as more soy and corn must be trucked to the Atlantic ports of Bahia Blanca and Necochea, in southern Buenos Aires province, where ships make a final stop to be topped off with cargo before heading out to sea.

The drying trend in Brazil started in 2019. The next year was drier and 2021 has been the driest of the three years, Hankes said. The effect on the river is cumulative.

Over the last 12 months the Parana River basin has gotten only 50% to 75% of normal rainfall.

“We do expect to see a wetter trend once we get into October-November, which you would typically see in the wet season anyway. But after that our best indications right now are that we could see a similar pattern to last year,” Hankes added.

The usually rainy Southern Hemisphere spring starts in September and ends in December. But the coming increase in water is expected to only temporarily help refresh the Parana.

“It could even get worse after the rainy season,” said German Heinzenknecht, a meteorologist at consultancy Applied Climatology.

“This shallow level of the waterway is historic, and it is hard to predict when it could be reversed,” Heinzenknecht added.

A top Argentine oilseeds executive with an international exporter with major crushing operation in Rosario agreed that the Parana crisis will probably continue next year. The executive asked not to be named, as per company policy.

“The situation will remain critical until October, improving in the late fourth quarter and first quarter. But from April onward, when Argentina’s soy and corn harvest starts, and the biggest number of cargo vessels are expected, the river at Rosario will be back to a scenario similar to 2021,” the executive said.