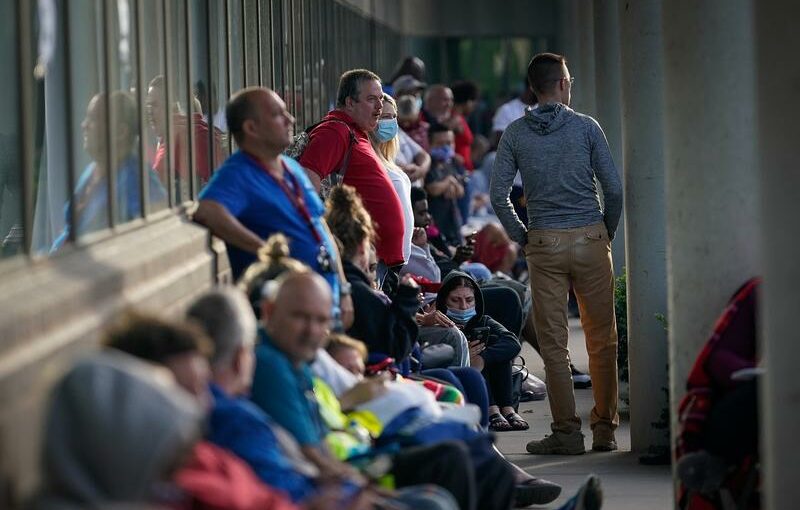 WASHINGTON (Reuters) – The U.S. Federal Reserve faces a long slog if it hopes for the country’s labor force participation rate to climb back to pre-pandemic levels according to new research identifying a participation “cycle” that typically lags falling unemployment rates by nine months and may move slower this time.

People line up outside Kentucky Career Center prior to its opening to find assistance with their unemployment claims in Frankfort, Kentucky, U.S. June 18, 2020. REUTERS/Bryan Woolston

The study conducted for the Fed’s Jackson Hole research symposium is relevant to the central bank’s debate over how to judge when the economy reaches “maximum employment,” and how to assess if the jobs recovery is sufficiently “broad and inclusive” across demographic groups.

A key aspect of that is whether the number of people in the labor force – either working or looking for a job – rebounds to where it was in early 2020, whether “labor supply” has instead been damaged by the pandemic in some permanent way, and how long the Fed can wait on any interest rate increase to find out.

Authors Bart Hobijn of the San Francisco Federal Reserve bank and Aysegul Sahin of the University of Texas at Austin offer some hope. Of the 1.7 percentage point reduction in the labor force participation rate from February 2020 to June 2021, they estimate that 1.5 percentage points is due to “cyclical” forces that should ease as hiring prospects improve.

But it may take a while. They don’t specify how long, but said it will likely be well after the unemployment rate reaches its lowest levels, projected by policymakers as perhaps 3.5% by the end of 2023. That translates into about 7.8 million additional jobs if “cyclical pressures” return to pre-pandemic levels.

The current shortfall in labor force participation is larger than they would have anticipated, and they attribute that to issues like more retirements and “ongoing family responsibilities” associated with the pandemic – lengthening an already slow process.

After the 2007 to 2009 recession, a steady decline in the labor force participation rate from around 66% led some economists to argue it would only continue to drift lower due to population aging. Yet it began climbing in late 2015 and continued doing so for four years, adding an unexpected boost to labor supply that included a surge of older workers also thought to have retired.

Their analysis challenges the standard explanation for why those labor force improvements happen as employment recovers.

It has been a near article of faith, they said, that labor force participation rates improve over time because “sidelined workers,” particularly the less well off, return to the job market.

That stronger “attachment” among the employed strengthens over time and across demographic groups.

Actual return to or departure from the labor force “is not very cyclical at all,” they wrote.

“Instead of marginalized workers being drawn into the labor force when the labor market is strong, it is the increased employment stability for those in the labor force that reduces the likelihood of current participants dropping out,” they concluded.