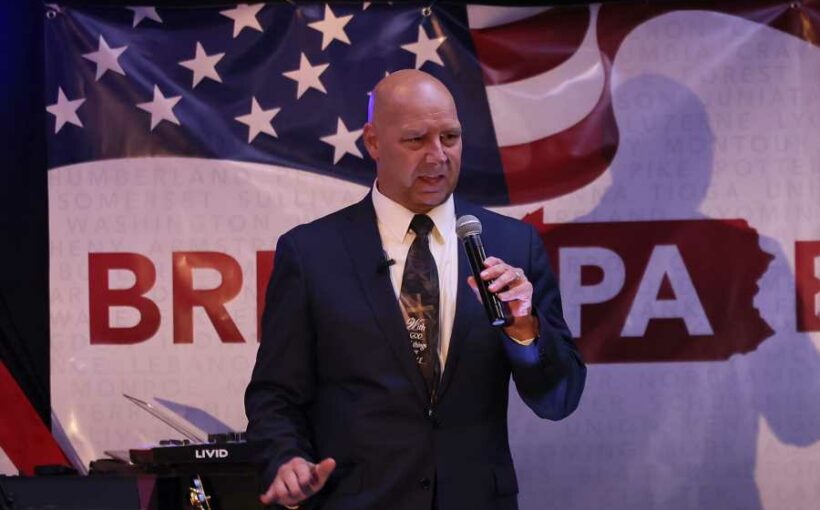 No one would mistake Doug Mastriano — the Trump-endorsed candidate for governor in Pennsylvania — for a moderate. He tried to overturn Joe Biden’s 2020 election victory, participated in the events of Jan. 6 (where he was slated to be a speaker), and has endorsed a no-exceptions abortion ban, dismissing the notion of “my body, my choice,” as “ridiculous nonsense.”

But in a radio interview in 2018, the former Army Colonel let the mask slip all the way down, revealing himself as an extremist who would block equality for LGBTQ couples, who denies global warming, and who believes Islam is “not compatible” with the United States constitution.

Mastriano made the extreme remarks during an interview in February 2018, as he announced a campaign for U.S. Congress. Mastriano spoke to hosts for WEEO News Talk 103.7, a conservative FM channel with a studio in Chambersburg, Pennsylvania, near the Maryland border.

After Mastriano declared himself a House candidate, the hosts asked a series of rapid-fire questions, beginning with: Is global warming is real?

“It is not,” Mastriano insisted. “It’s fake science. And it’s a racket at the academic level.”

The hosts asked Mastrianio if gay marriage should be legal. “Absolutely not,” he answered, citing the Old Testament. “I’m for traditional marriage. And I am not a hater for saying that. It’s been like that for 6,000 years,” he said, invoking the bible: “It was the first institution founded by God in Genesis and it needs to stay that way.”

The hosts also asked Mastriano if same-sex couples should be able to adopt children. “No,” he replied. And Mastriano was even more adamant when asked whether gender identity should be added to the nation’s anti-descrimination laws. “Absolutely not,” he insisted. “That’s madness.”

The hosts then asked the former Army officer, who served in Iraq and Afghanistan, “Is Islam compatible with the Constitution?”

Mastriano replied without hesitation: “It is not.” He insisted that “the Constitution was founded on Christian Judeo ideas and it’s only compatible with that worldview.” Doubling down on his denigration of Islam, Mastriano added: “Guess what? Not all religions are created equal.”

This declaration is particularly alarming in the context of the 2022 election, because Mastriano is running for statewide office on the same ballot as Republican Mehmet “Dr.” Oz, the first Muslim from either party to be nominated for U.S. Senate.

Earlier in the same interview, Mastriano sounded off at length about DACA recipients — also known as “Dreamers” — who were brought to America as undocumented immigrants by their parents. Mastriano argued that these young immigrants are “illegal and they shouldn’t be here.” He insisted that they should not only be disqualified from citizenship, but, ”They need to go back home.” Mastriano suggested these young immigrants were harming U.S. citizens. “What about the American dreamers?” he asked. “What about our people?”

The interviewers did not ask Mastriano whom he counted as “our people.”

Mastriano even said he’d be open to law enforcement rounding these immigrants up. “My Democrat friends will take it to the extreme: ‘Oh, you’re gonna pick people up off the roads,’” Mastriano said, adding darkly: “You know what? Maybe.”

Mastriano’s 2018 congressional bid flamed out after only a few months after this interview. He finished fourth in the crowded GOP primary. Rolling Stone reached out to Mastriano by email last week, asking if his views on these subjects have evolved. He did not respond.

Mastriano’s remarks on gay adoption were previously highlighted by the Washington Blade, and NBC News highlighted Mastriano’s belief that Islam was not “created equal.” But the full scope of his controversial comments have not previously been reported. In the rapid-fire questioning, Mastriano also blasted the prospect of legal marijuana in Pennsylvania, insisting: “I’m against it.”

Mastriano continues to run on a far-right platform. He returned to the same radio show last week to denounce his Democratic opponent Josh Shapiro as a radical for supporting gender inclusivity in Pennsylvania’s public schools. “Josh Shapiro thinks it’s OK to add gender confusion to our little kids in school,” Mastriano said. “They want you to pick your pronouns, are you kidding me? Stop this.” Mastriano described the Democrat’s position as, “It’s OK for your kids to be sexualized in the classroom — that’s Josh Shapiro, that’s the extremist.”

Mastriano will be campaigning this week with Florida’s far-right governor Ron DeSantis, whom Mastriano praises as an example of “how a governor can do it right.” Mastriano insisted he wants to model himself after the authoritarian Floridian. “If you want to have a Ron DeSantis in Pennsylvania,” he said, “I’m your guy.”