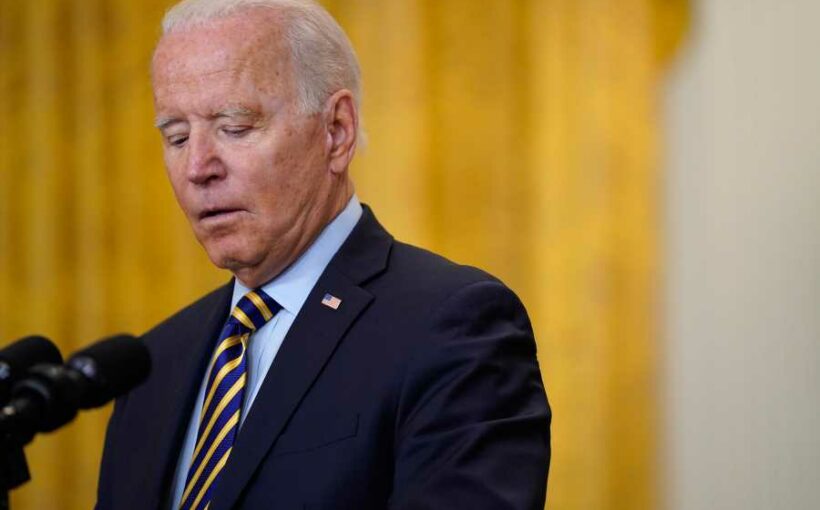 There’s a vintage Texas phrase that perfectly sums up President Joe Biden’s career-long record on voting rights: “all hat and no cattle.” It’s a way to describe a dude who’s all talk and no action — and it evokes the image of a fake cowboy strutting around in a Stetson hat and spurs, playacting the part John Wayne-style, when he wouldn’t know how to rope a steer or snip a bull’s testicles if his life depended on it.

Few white politicians, if any, have ever talked more convincingly about their dedication to voting rights than Biden — particularly when he’s been vying for African Americans’ votes. “Throughout my career,” he wrote in an op-ed for The State newspaper in South Carolina in December 2019, a few months before the state’s crucial presidential primary, “I have worked to strengthen protections for voting rights.” The one tangible example of this “work” that Biden can point to — and does, repeatedly — is co-sponsoring a renewal of the Voting Rights Act in 2006. A bold stand for justice this was not; there was zero opposition, even from conservatives, and the Senate passed the measure with a 98-0 vote. Nonetheless, a Biden administration, he vowed, would build on his stellar track record and “work tirelessly to protect the voting rights of Americans.”

Last July, after South Carolina’s black voters rescued his flagging candidacy and propelled him to the nomination, he made a more specific vow in a speech at Howard University, shortly after the death of civil-rights hero John Lewis. “One thing the Senate and the President can do right away is pass, right away, pass the bill to restore the Voting Rights Act,” Biden declared. “You know, back the effusive praise we’ve heard since [Lewis] passed —  especially from our Republican friends — back it with some action. Protect that sacred right to vote that he was willing to die for. If they don’t, I’ve been saying all along, it’s one of the first things I’ll do as president if elected.”

Biden has been president for almost six months now. During that time, legislatures in 17 states have enacted a total of 28 voter-suppression measures (and counting). The Supreme Court has gutted what remained of the Voting Rights Act, further weakening the law after its 2013 decision in Shelby v. Holder gave Republican-dominated state legislatures a green light to start suppressing votes again. In response, Biden has said little and done even less. That was supposed to change on Tuesday, when the president would deliver what his aides billed as a “major address” on voting rights in the symbolically charged setting of Philadelphia’s National Constitution Center. Biden, they said, was going to send a strong signal that he was not ignoring the seriousness of the mounting threat that Republicans were posing to voting rights.

And give him credit: He did signal exactly that, in a speech full of sound, fury, and excellent soundbites. Biden called the big lie of a stolen 2020 election “just that — a big lie.” He deemed the GOP’s voter-suppression frenzy “anti-American,” not to mention “an assault on democracy, an assault on liberty, an assault on who we are.” He said it posed “the most significant test of our democracy since the Civil War.” He termed Georgia’s widely copied Election Integrity Act “vicious” and said such laws amounted to a restoration of “Jim Crow.” He shook his fist, literally, at the anti-democratic Republicans, looking skyward and crying out, “Have you no shame?”

While the president was holding forth, I was on the phone speaking with one of the Georgia Democrats who’d fought GOP lawmakers tooth-and-nail this past winter as they steamrolled their 98-page voter-suppression bill to passage. “I don’t care about speeches,” said Rep. Renitta Shannon, explaining why she hadn’t bothered to tune in to hear what Biden might say. “I care about action.”

And here is the sum total of the “action” Biden announced on Tuesday: “As soon as Congress passes the John Lewis Voting Rights Advancement Act and the For the People Act, I will sign it.” The audience at the Constitution Center cheered on cue. But the president laid out no strategy whatsoever for ensuring those bills would pass, though he knows full well that they’ve stalled out in the Senate because of the filibuster rule that requires 60 votes to pass them. Nor did he use the occasion to pressure Sens. Joe Manchin and Krysten Sinema to abandon their shared filibuster fetish or, at a minimum, to permit their Democratic colleagues to carve out an exception for voting-rights legislation that would clear the way for those bills to reach his desk for signing. He did not so much as utter the word “filibuster.”

After Biden’s address, the Rev. Al Sharpton greeted the president backstage. “I said to him I thought it was a good speech. I was very happy to hear him bring up race, but [said] we’re still waiting on the filibuster. He told me, ‘We’re still working on our position on that.’ He was noncommittal.”

In the days leading up to Biden’s “major address,” his press secretary, Jen Psaki, was far more frank about the president’s stance on filibuster reform. “The president’s view continues to be aligned with what he has said in the past, which is that he has not supported the elimination of the filibuster,” she told White House reporters on Monday. What about carving out an exemption for voting-rights legislation, the move House Majority Whip Jim Clyburn — the man who opened the path to Biden’s presidency with his critical endorsement in South Carolina — has been calling for? “We don’t have any new position on that, either,” Psaki said.

Like the other black voters who gave Biden his decisive margins of victory in key battleground states in 2020 — not just Georgia, but Michigan and Pennsylvania as well — Shannon told me she’d fully expected that Congress would enact voting-rights measures to override the worst elements of Georgia’s law long before now. She’d also expected Biden to urge them on. Instead, as she noted, her state is already conducting off-year elections under the new, repressive regime. “I am surprised,” she said, “because I thought that Democrats would have realized under the Trump administration that voting rights has been a street fight for a long time. But Republicans are still the only ones fighting that way — except for the Texas House Democrats, who put their bodies on the line, and risked arrest, yesterday by leaving the special session and flying to Washington. That is what we need to see.”

Later on Tuesday, Shannon sent me a follow-up email with a request: “Please add this to what you quote me on: Life is way too cushy for Joe Manchin and Kyrsten Sinema as they stand in the way of voting rights, and President Biden has the power to change that.”

So far, there’s no sign that Biden has any intention of using that power — to do any arm-twisting or hard bargaining, LBJ-style, to bring Manchin and Sinema to heel when it comes to the filibuster. And why would he, given that he agrees with them that preserving the filibuster matters more than preserving democracy? As Clyburn said last week, when asked whether voting-rights legislation would ever get through the Senate: “I know it’s possible. The question is whether it’s probable. The way is clear; developing the will is what has to be done.”

In Philadelphia, Biden cynically echoed Clyburn as he wound up his speech. “We have the means. We just need the will. The will to save and strengthen our democracy,” the president said. “We must act.” And then, after God-blessing America and the troops, he returned to that theme before leaving the podium. “Act!” Biden said. “We’ve got to act!”

No sir, Mr. President. It’s you who’s got to act. It’s you who must demonstrate, at long last, that your half-century of virtue-signaling on voting rights has not merely been, to coin a phrase, pure 100-percent malarkey.