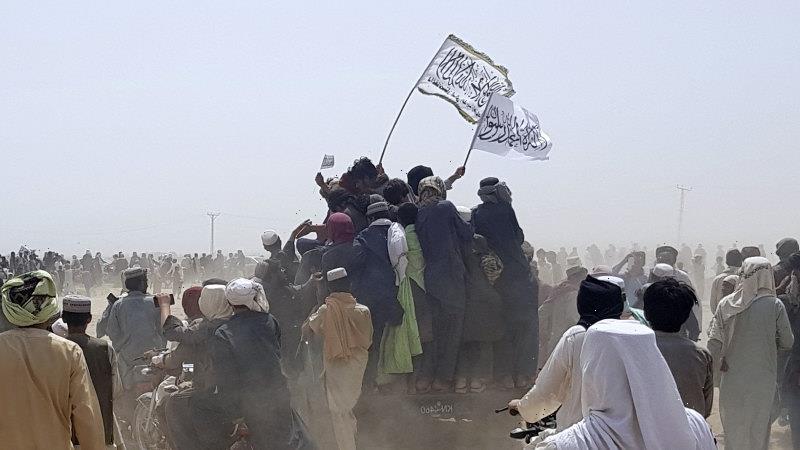 Kabul: The Taliban are pressing on with their surge in Afghanistan, saying they seized a strategic border crossing with Pakistan on Wednesday – the latest in a series of key border posts to come under their control in recent weeks.

The development was the latest in Taliban wins on the ground as American and NATO troops complete their pullout from the war-battered country. On Tuesday, an Afghan official said a senior government delegation, including the head of the country’s reconciliation council, would meet the Taliban in Doha, Qatar, to jump-start the long-stalled peace talks between the two sides. 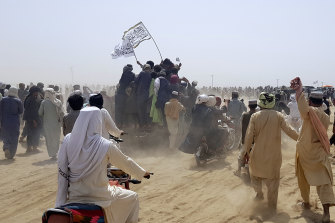 Supporters of the Taliban carry the Taliban’s signature white flags in the Afghan-Pakistan border town of Chaman on Wednesday.Credit:AP

Taliban spokesman Zabihullah Mujahid tweeted a video purporting to show Taliban fighters on Wednesday in the south-eastern town of Spin Boldak along the Afghanistan-Pakistan border. On the Pakistani side, residents of the border town of Chaman reported seeing the Taliban’s signature white flag flying just across the boundary line and Taliban fighters in vehicles driving in the area.

However, an Afghan government official from southern Kandahar province, where Spin Boldak is located, denied that the Taliban had taken control. The official declined to be identified by name, without explaining why.

The Taliban have in recent weeks taken a string of major Afghan border crossings, including with Iran, Uzbekistan and Tajikistan. The border crossing with Iran at Islam Qala in Afghanistan’s western Herat province is particularly lucrative and an important trade route.

SpinBoldak is a key crossing for all goods from Pakistan’s southern port city of Karachi to Afghanistan, a landlocked nation dependent on the Arabian Sea port.

Last week, the Taliban said they now control 85 per cent of Afghanistan’s territory – a claim that is impossible to verify but that was considerably higher than previous Taliban statements that more than a third of the country’s 421 districts and district centres were in their control.

Many Afghan districts have fallen to the Taliban without a fight as Afghan forces abandoned their posts. Reports indicated that Spin Boldak also fell without a fight. 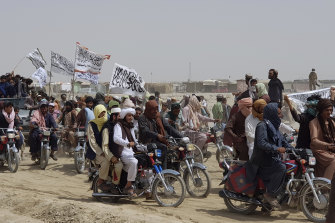 The Taliban have in recent weeks taken a string of major Afghan border crossings.Credit:AP

In northern Afghanistan, a traditional stronghold of US-allied warlords, more than 1000 Afghan military men fled across the border into northern Tajikistan last week ahead of the advancing Taliban. Iran also reported a few hundred Afghan troops crossing into Iran.

The taking of key border crossings will likely mean significant revenue for the Taliban while also strengthening their hand in any future negotiations with the Kabul government.

The Taliban surge has also resulted in tens of thousands of Afghans fleeing their homes – some as a result of the fighting, but many out of fear of what life might be like under Taliban rule.

Zalmay Khalilzad, the US special representative for Afghanistan reconciliation, acknowledged the ongoing chaos in remarks on Wednesday. However, he pointed to the decades of unrest in the country since the 1979 Soviet invasion.

The Taliban leadership has tried to present a softer image – even saying that once they return to power in Afghanistan, girls can attend school and women will be allowed to work. However, in areas where they have gained control, reports from villagers say women are often being ordered inside, allowed out only when accompanied by a male relative.

In the video circulated by Mujahid, an unidentified Taliban fighter says that while they could have killed the Afghan soldiers at the border crossing, they were ordered by their leadership not to hurt them but to send them home.

The Taliban were expected to bring their senior leaders to the talks in Doha, where the insurgent movement has long maintained a political office.

The negotiations are aimed at ending the violence that has steadily increased since the US signed a deal with the insurgent movement in February last year spelling out the withdrawal of foreign forces from Afghanistan.

There are rising concerns for what lies ahead and thousands of Afghans are trying to leave the country amid growing anxiety about the future. Outgoing US commander General Scott Miller, who officially stepped down at a ceremony in Kabul on Monday, has warned that increasing violence seriously hurts Afghanistan’s chances of finding a peaceful end to decades of war.

Miller also warned of a possible civil war as US-allied warlords have been resurrecting their militias in an attempt to stop the Taliban surge. The militias have a violent history.