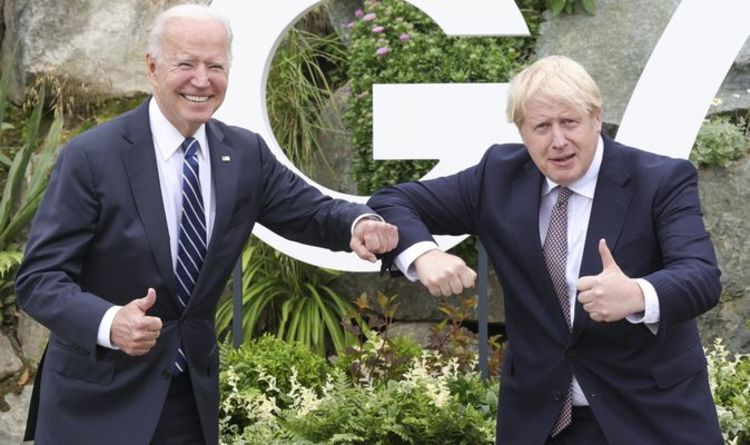 The Prime Minister visited the White House in September and held discussions with Joe Biden over a free trade agreement. Mr Johnson suffered a major setback after he was told the US was not focusing on striking deals at this present time.

Julian Jessop, Economics Fellow at the Institute of Economic Affairs, has acknowledged there is little appetite in Washington for a wider Brexit deal, but insisted there could be an opportunity to strike “mini-deals”.

During his trip across the Atlantic, the Prime Minister also refused to commit to whether a trade deal could be finalised with the US before the next general election, which is set to take place in 2024.

But the independent economist was not concerned by the timeline and insisted any agreement would be completed quicker than if the UK was still a member of the European Union.

Mr Jessop told Express.co.uk: “The US appears to be in no hurry to do a major trade deal with the UK.

“However, it should still be possible to do a series of mini-deals in less sensitive sectors.

“The EU is also notoriously slow at doing trade deals itself, and these are unlikely to prioritise the interests of the UK.

“So even it takes a while longer than hoped for the UK to do a deal with the US, it is still likely to be a quicker and better than the UK could get as a member of the EU.”

The Department for International Trade estimates a free trade agreement could increase the figure by £15.3billion.

Speaking outside the US Capitol building on September 22, Mr Johnson admitted he is taking “incremental steps” towards a US trade deal.

The Prime Minister did remain upbeat and championed an agreement to export British meat to the US for the first time in three decades.

Ministers said the US market will be worth £66million to the UK over five years.

The Prime Minister said: “I can tell you today that what we’re going to get from the United States now is a lifting of the decades-old ban, totally unjustified, discriminating on British farmers and British lamb.

“It’s about time too. And what we’re wanting to do is make solid incremental steps in trade.

“The Biden administration is not doing free trade deals around the world right now but I’ve got absolutely every confidence that a great deal is there to be done.

“And there are plenty of people in that building behind me who certainly want a deal.”
Source: Read Full Article