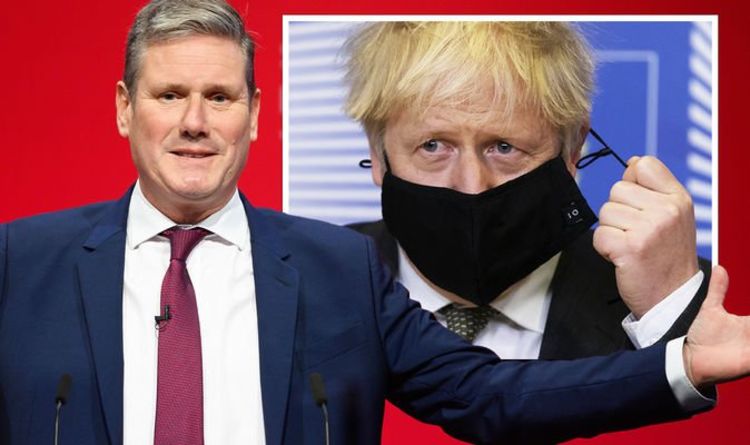 In findings likely to set nerves tinkling, snap polling from after the Labour leader’s speech in Brighton indicate it was a hit with Britons. A survey by Opinium found 63 percent agreed with Sir Keir Starmer, while 57 percent said he appeared strong and 63 percent said he came across as competent.

A total of 1,330 people were shown excerpts of the speech before being asked for their assessment.

Sir Keir’s speech lasted for over an hour and a half and outlined his broad vision of Britain.

He attacked Corbynism and Mr Johnson as he pledged to once again make labour an election-winning machine.

A few weeks ago, Opinium carried out a similar survey of voters showing them Mr Johnson’s first speech as Conservative leaders.

In comparison to Sir Keir’s reception, it found 51 percent agreed with what Mr Johnson had to say, 52 percent believed it showed he was strong and just 46 percent thought he came across as competent.

The success of the vaccine rollout and the public’s sympathy on dealing with the coronavirus pandemic has boosted the Prime Minister’s popularity in recent months.

Meanwhile, Sir Keir has been accused of sniping at the sidelines and failing to be constructive at the time of a national crisis.

With the pandemic largely over now, the latest polling on Sir Keir will be a warning to Mr Johnson that public mood could shift.

In his speech at the Labour Party conference, Sir Keir attacked Mr Johnson for being a “trickster” not fit to be Prime Minister.

He looked to present himself as a serious contender for No10 claiming under his leadership who country “will go forward”.

“It’s easy to comfort yourself that your opponents are bad people,” he told Labour members.

“But I don’t think Boris Johnson is a bad man.

“I think he is a trivial man.

DON’T MISS:
‘It was our mother’s funeral’ Gina Miller silenced after PM jibe [REACTION]
Farage erupts at Boris for ‘only talking tough’ on Insulate Britain [WATCH]
An alternative Labour Party speech (what Sir Keir SHOULD have said!) [COMMENT]

“I think he’s a showman with nothing left to show.

“I think he’s a trickster who has performed his one trick.”

At another point in the speech he reiterated an old joke told by Mr Johnson describing himself as a “blithering idiot”.

He accused the Prime Minister of an attitude that “the rules don’t apply to him”.

Next week the Conservatives will meet in Manchester for their won party conference.

Mr Johnson will have the opportunity to make his own pitch to Tory voters as he looks to reflect on his achievements since entering Downing Street and outline his plans for the future.

He will deliver his speech on October 6.