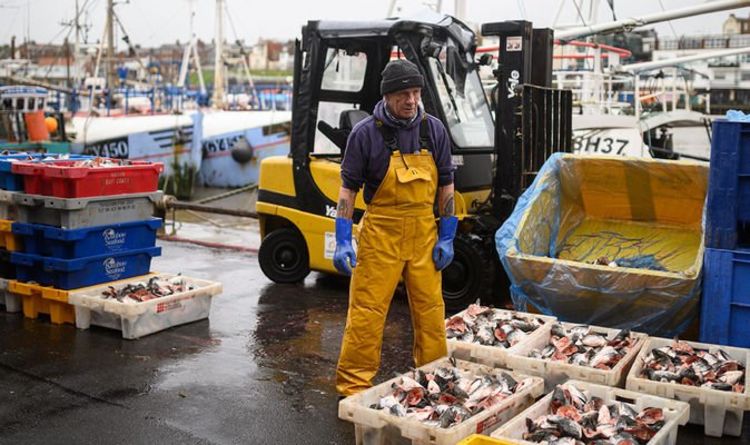 The organisation has been critical of Boris Johnson’s trade deal since it was signed last December. They accuse the government of having “sacrificed” their industry in order to secure an agreement.

Post-Brexit fishing rights was one of the biggest friction points in negotiations with the EU and a deal on the issue was not brokered until the last minute.

Now, a new report released by the National Federation of Fisherman’s Organisations (NFFO) claims the industry is set to lose out on hundreds of millions of pounds as a result of Mr Johnson caving to EU demands.

It means over £300million will be lost by 2026 when the current fishing arrangements agreed with the EU comes to an end.

The Government claimed an increase in quotas for fish meant the industry would benefit from an additional £148million by 2026.

However, the report says the majority of the increase in quotas is unlikely to be usable for various reasons, meaning there is little monetary value in the uplift.

At the same time, the report warns there is currently an imbalance in permit arrangements for catch in UK and EU waters.

Barrie Deas, Chief Executive of the National Federation of Fishermen’s Organisations said: “From reviewing these findings, the NFFO’s conclusion is that there are very few winners and a great many losers.

“These figures suggest that the bulk of the UK fishing fleet is on a trajectory to incur losses amounting to £64million or more per year over the timeframe of this analysis, meaning that, unless changes are secured through international fisheries negotiations, the industry will have lost in excess of £300million by 2026.

“The best opportunity in a generation to revive the UK’s fishing industry and support our coastal communities has been squandered and we must act swiftly to learn from these lessons and support the sector in future negotiations.”

Former fisheries negotiator at the Department for Environment, Food and Rural Affairs (Defra), Gary Taylor, carried out the report.

He warned as well as frustrations with the Brexit trade deal, there have also been concerns over negotiations with other countries now the UK is out of the EU.

While a part of the bloc, annual fishing agreements with Norway, the Faroes and Greenland were organised by Brussels.

It is now for Britain to broker its own annual deals with the countries, although so far only temporary arrangements have been agreed.

The report warns the failure to clinch the deals has reduced fishing opportunities for large parts of the UK fleet.

Commenting on his findings, Mr Taylor said: “I hope this report, which is rooted in my own decades of experience in fisheries talks, will shine a light on the current situation and help support the owners and crews of this vital sector in the negotiations that lie ahead.”

He added the UK-EU trade and cooperation agreement had led to “an immediate and dramatic impact” on the industry.