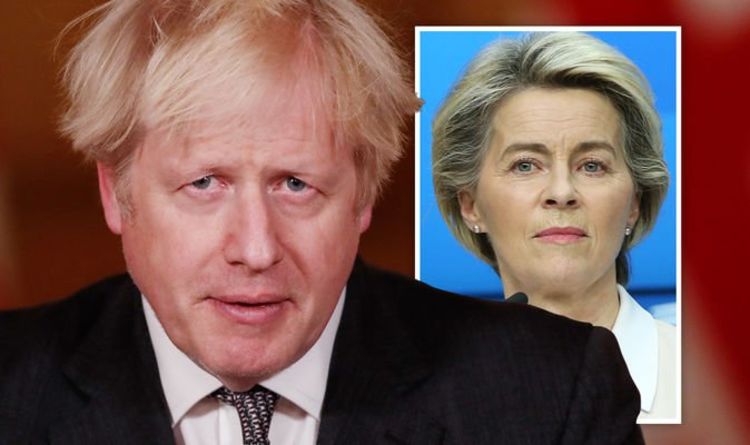 Brexit talks 'have not made progress' says Lord Frost

But Whitehall insiders insist there was no dispute with the accounts published by the European Commission put the bill at £40.8billion. Downing Street rejected the figure, saying the multi-billion pound difference between the two is because of differences in accounting between London and Brussels. Steve Barclay, Chief Secretary to the Treasury, said the estimate was in line with previous Government calculations to settle the bill.

In a written statement today, he said: “The first invoice under the financial settlement was received in April 2021 in relation to payments to be made in the period June to September 2021.

“The net UK liability under the first invoice was €3.74billion (£3.19billion) and the first of four equal monthly instalments was paid at the end of June.”

During our divorce talks, the EU demanded that Britain continues to pay for financial commitments made before the end of the transition period on January 1.

British officials argued the main reason for their lower estimate is because the Treasury has removed money still owed to the UK after Brexit.

Sources say this could include farming subsidies from the Common Agriculture Policy and funding from the bloc’s Horizon 2020 science and research fund.

But they maintain that there is no dispute over the differences and Britain is paying its bills on schedule.

Details of the Brexit bill are contained within the Treasury’s annual report on EU finances.

Civil servants will continue to produce the document while Britain continues to send money to Brussels.

Payments are expected to continue until the 2060s.

A UK Government spokeswoman said: “This statement sets out our full estimate of what we expect to pay for the financial settlement, which remains within our central range of £35-39bn.

“The Government continues to work constructively with the EU to ensure that the UK pays the right amount under the Withdrawal Agreement.”

Brexiteer Tory MP Peter Bone said it was “completely absurd” that after paying in more than the country took out for its entire membership of the bloc that Brussels claims the final bill is even higher than expected.

He said: “The EU should be paying us money. We were a net contributor throughout our period within the EU.

“The idea that when we have left the club we need to pay them even more money is completely ridiculous.

“The EU is just being its normal unreasonable self.”

“One thing is certain, we shouldn’t be paying them a cent more than they are entitled to. We always knew there would be a financial reckoning and we have always understood that we might have to pay them some money.

“The House of Lords Europe finance sub-committee looked at it a few years ago and worked out we didn’t owe them anything at all.”

He added: “There’s bound to be an argument about this. Most fair people would think that if there is money owed by the country to anybody else properly then it should be paid, but that doesn’t mean there is a blank cheque. If they are expecting us to pay that sort of money they are going to have to justify it.”