LAS VEGAS – Former GOP Gov. Chris Christie of New Jersey urged his party to stop looking back to former President Donald Trump’s 2020 election defeat and instead “move on and talk about issues that voters care about.”

Christie spoke in a speech to an influential group of Republicans and in an interview with Fox News.

Christie, who ran unsuccessfully for the 2016 GOP presidential nomination, told Fox News he’ll run for the White House again in 2024 if “I think I can win and I think I can make a difference.”

Christie was in Las Vegas on Saturday, addressing the annual leadership meeting of the Republican Jewish Coalition (RJC), a major conference of party leaders, activists and mega-donors.

“We can no longer talk about the past and the past elections,” the former governor, a supporter of Trump but vocal critic of the former president’s litigating of the 2020 election, said to applause.

“No matter where you stand on that issue, it’s over,” Christie argued. “Every minute we spend talking about 2020, while we’re wasting time doing that, Joe Biden and Kamala Harris, Nancy Pelosi and Chuck Schumer are laying ruin to this country. We better focus on that and take our eyes off the rearview mirror and start looking through the windshield again.”

Asked about the reception his message received, Christie said, “I thought there was a lot of positive reaction in the audience. I  think they understand that the looking backwards part, we lose. We lose if we look backwards. We’ve got to go forwards, we’ve got to move on. We’ve got to move on and talk about issues that voters care about.”

The former governor pointed to this past week’s gubernatorial victory by Republican Glenn Youngkin in Virginia, where the GOP hadn’t won statewide in a dozen years, and by Republican Jack Ciattarelli’s near upset of Democratic Gov. Phil Murphy in the blue state of New Jersey.

“This past Tuesday was the beginning of the new era for the Republican Party,” Christie told the crowd.

“Glenn Youngkin did not have a backward-looking campaign and neither did Jack Ciattarelli,” Christie emphasized in his interview.” If what we’re going to continue to talk about is the 2020 election and grievance politics, I think you got a market test in Virginia and in New Jersey. And that market test was candidates don’t think that’s going to work. And one of those candidates won, and the other candidate came close in a blue state to winning.”

Christie stressed “lower taxes and educational choice. That’s what people want to hear” and that Republicans “need to go back to winning suburban voters,” which was a key to Youngkin’s victory in Virginia over former Democratic Gov. Terry McAuliffe.

Christie has been active so far this cycle in helping fellow Republicans seeking office or running for reelection. He serves as a co-national chair – along with former Secretary of State Mike Pompeo – of the National Republican Redistricting Trust, the GOP’s primary organization to coordinate the party’s redistricting strategy and build resources for its legal defense. 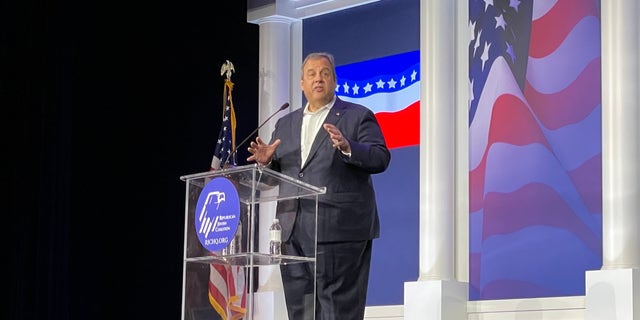 He’s also co-chair of the Republican Governors Association Victory Committee, “raising money for Republican governors and Republican gubernatorial candidates and traveling around the country to do that.”

Christie was one of eight prominent Republicans speaking at the four-day RJC confab who pundits view as potential 2024 GOP presidential hopefuls.

Five years ago, the then-New Jersey governor’s presidential run crashed and burned after a disappointing and distant sixth-place finish in New Hampshire’s presidential primary, where Christie had placed all his chips. Christie quickly backed Trump, who crushed the rest of the field in New Hampshire, launching him towards the Republican presidential nomination and eventually the White House.

Now, nearly 10 months removed from the presidency, Trump continues to flirt with another White House run in 2024. Christie is one of the few other Republicans mulling a GOP nomination run who’s comfortable discussing it publicly.

He said he’s in no rush to make any decision because “the people of New Hampshire, the people of Iowa, and most of the people in the country know me, so I don’t have to go through the introductory process. So I’ll take my time, I’ll be thoughtful about it.”

And Christie said that Republicans “know me pretty well and they may not agree with everything I say, but that everything I say is what I truly believe and what I’ll deliver if they give me the chance.”