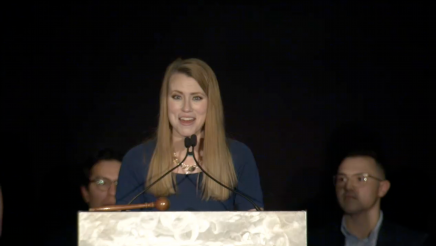 The future for the Colorado Republican Party is female, as hundreds of members voted Saturday to elevate Vice Chair Kristi Burton Brown to the party’s top spot alongside two other women, creating the state party’s first all-female officer group.

Before the vote, Burton Brown promised to take back Colorado for Republicans and defend the state against Democrats “trying to take away our freedoms and tax Coloradans into poverty.”

She also pledged to dig deeper into the 2020 election. Of the five candidates for the top position, only one, Jonathan Lockwood, unequivocally acknowledged that the presidential election was not stolen.

Burton Brown painted herself as a bridge builder and unifier who has the skills to establish message discipline and better fundraising and candidate support mechanisms, specifically to unseat Gov. Jared Polis — whom she described as “King Polis — and state Attorney General Phil Weiser, Secretary of State Jena Griswold, Treasurer Dave Young and Democratic Sen. Michael Bennet.

“We face the battle of our lives,” Burton Brown said. “I will take the fight to the Democrats. They are our enemy, not each other.”

Burton Brown and Gessler emerged as early front-runners in the race, after years of election losses and division. Under the tenure of the outgoing chairman, U.S. Rep. Ken Buck, elected in March 2019, several internal disagreements fractured the party, particularly in El Paso and Weld counties.

After two rounds of voting without a majority for any candidate, Lockwood, Casper Stockham and Rich Mancuso dropped out of the race and threw their support behind Burton Brown, saying she was the candidate who could lead the party into the future.