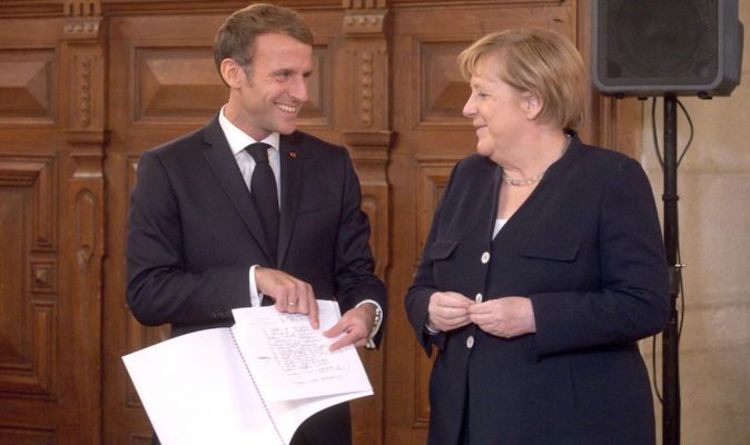 Following Angela Merkel’s final visit to France as Chancellor, Mr Macron paid an emotional tribute to the “exceptional career” of the German leader. He said: “Thank you for having accepted this impetuous young president who wanted to shake things up, thank you for your patience and indulgence towards me.

“You have accepted this energy, perhaps sometimes this insolence, with a great deal of benevolence and wisdom and from this I have learned.

“We have together shaken up many things and done a lot for Europe, before the crisis and after the crisis.

“Since you became Chancellor, France has come to know you and love you,” he said.

“During all these years, you have contributed to keeping Europe united.”

Mr Macron made the speech while presenting her with the Grand Cross of the Legion of Honour, an award which according to the French President “embodies the solidity of the Franco-German friendship, maintained by Angela Merkel”.

In response, MEP Philippe Olivier tweeted: “What an admission of his pathetic subordination!

“It is a daily humiliation for France to have such a leader!”

This comes less than a week after Macron suffered a blow when he withdrew threats of sanctions, which were issued to the UK during the escalating fishing row.

Macron had threatened the UK with sanctions from midnight on Monday, but withdrew the threats earlier that day saying, “the talks need to continue”.

The presentation, which celebrated Angela Merkel’s 16 years in power, took place at the Clos de Vougeot Castle, near Beaune.

In response to Mr Macron’s emotional presentation, Ms Merkel said: “What was good was that we shared the same values, even if we often had different ideas at the beginning.

“We often managed to get together and do more than we could have done on our own.”

The two leaders hugged one another at the end of the presentation.

Mr Macron and Ms Merkel have become considerably closer as leaders since the 2017 French presidential election, and have built close ties between the two countries.

For example, in response to Covid-19, the two countries forged an alliance that led to the €750 billion European recovery plan in 2020, which was largely financed by pooled European loans.

During her 16 years in office, Merkel has had to adapt to various French presidents, including Jacques Chirac, Nicolas Sarkozy and François Hollande.

The Chancellor is due to step down from politics in December.

The new government is currently being negotiated by the Social Democrats (SPD), winners of the 26 September parliamentary elections, and the Greens and Liberals.

If the negotiations are successful, Social Democrat Olaf Scholz, the current Finance Minister, will take over.

The Chancellor may return to Paris for the Peace Forum on November 11 and a meeting on Libya the following day.