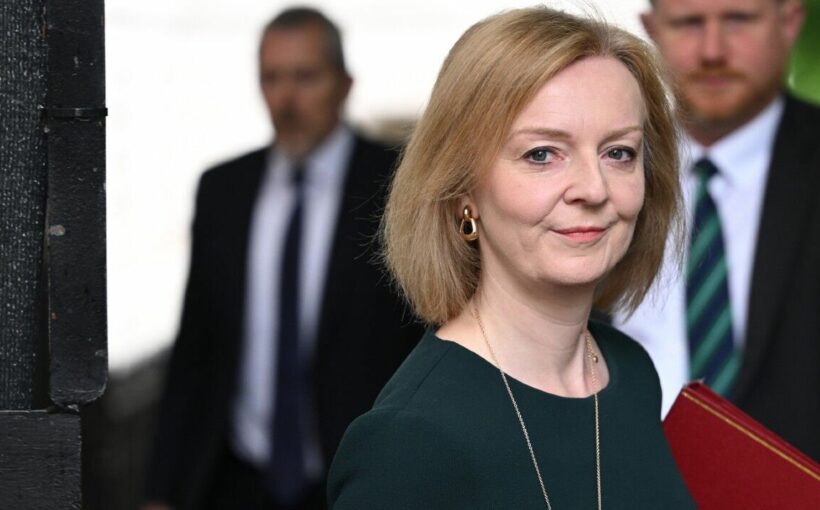 The warning comes as Foreign Secretary Liz Truss said problems with the province’s Brexit trade deal cannot be allowed to “drift”, but insisted the Northern Ireland Protocol would not be scrapped. Ms Truss, on a visit to Northern Ireland, pledged on Wednesday, May 25, to remove customs red tape while protecting the EU Single Market.

The protocol agreed between the Government and EU in 2019, was designed to keep Northern Ireland inside the EU Customs Union and the UK outside of it after Brexit.

Loyalists argue, however, that placing an effective border across the Irish Sea undermines Northern Ireland’s place within the UK.

In its latest edition, magazine The Critic criticised the protocol, saying it has not worked on any level.

It adds: “The protocol has not even worked in its own, EU-serving, terms. Trade has been diverted within the UK without action to rectify this…

“The protocol has collapsed the devolved institutions in Northern Ireland.

“Yet what has been the EU’s response? The protocol is perfect, it won’t be changed, it’ll be ‘rigorously implemented’, it ‘provides for the best of both worlds’, the problems with it will be sorted, we won’t tell you what those solutions will be to the problems that don’t exist, and on no account should the UK, says the European Union, break laws or agreements.”

Simon Coveney, Ireland’s Minister for Foreign Affairs, comes under fire for claiming the UK Government could “erode peace” by acting to fix the protocol.

The Critic states: “Here, yet again, is a grotesquely irresponsible Irish Government minister invoking the threat of Republican terrorism. To which threat the UK should give way, and if it doesn’t then that’s London’s fault.

“This rhetoric — and reasoning — is obscene. But what makes it worse is the lack of an official British response.”

It concludes: “The EU shouldn’t push its luck any further. They have fewer friends here than they had when the original terms were negotiated and risk very much worse outcomes.”

The article came after Ms Truss announced plans to table legislation at Westminster which would override parts of the protocol without EU approval.

The Government’s move came amid the ongoing power-sharing impasse at Stormont sparked by the DUP’s refusal to form a new devolved executive after the Assembly election.

DON’T MISS:
‘Chaos’ hits Heathrow Airport as ‘huge queues’ stretch [REVEALED]
‘Is this what all fuss is about?’ New Partygate photos mocked [REPORT]
Queen ‘gradually breaking free from the past’ as monarchy evolves [LATEST]

DUP politicians want the so-called Irish Sea border, set up to avoid a hard border between Northern Ireland and the Republic, removed.

Ms Truss, speaking in Lisburn, Co Antrim, said: “I am in Northern Ireland to talk about our solution on customs, putting in place a red and green lane to make sure that we remove customs bureaucracy for those goods that are travelling from Great Britain into Northern Ireland, so we can restore the balance between the communities and restore the working of the Belfast/Good Friday Agreement.

“We have had months of negotiations with the EU and our preference remains a negotiated solution, but what we cannot allow is for this situation to drift.

“It’s very important that we deal with these practical issues, how we remove the customs bureaucracy whilst at the same time protecting the EU Single Market to resolve this situation.”

She continued: “What we have been clear about is the protocol is causing political instability, so we haven’t seen the Northern Ireland Executive in operation since February.

“What we need to do is to make sure that as well as protecting north-south trade, we are protecting east-west trade.”

Ms Truss added she was visiting the region with practical solutions, which include sharing commercial data with the EU to protect the Single Market, at the same time as making it easier to trade goods into Northern Ireland from Great Britain.

She said: “Everybody in Northern Ireland recognises our issue is with the protocol, we are not talking about scrapping the protocol, what we are talking about is fixing the issues so we can protect north-south trade whilst at the same time making east-west trade easier.”

The visit coincided with a trip to Londonderry by Democratic and Republican delegates from the US House of Representatives and Senate, led by congressman Richard Neal.

Mr Neal, speaking in Derry, said: “People here took up much more severe challenges… This is an issue for the European Union and for the UK Government to sift and sort.

“I think we want to be mindful of the fact that the difference of opinion that existed from Brussels and London was substantial, and the Commission in the European Union, they suggested these problems were imminently solvable, and I think based on the conversations we had of good faith that is the case.”