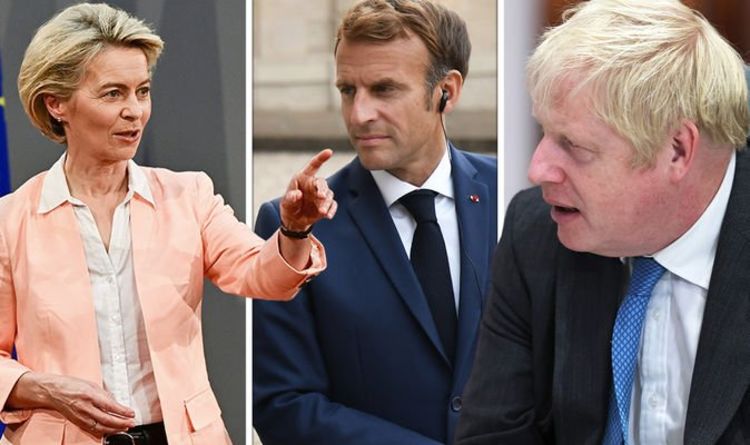 The European Commission President was told she risked losing a number of hard-won concessions if she pandered to French President Emmanuel Macron and cancelled the so-called Trade and Tech Council meeting. The concerns were voiced by members of her top team of eurocrats and a number of EU member states. Mrs von der Leyen was said to be weighing up her options after Australia reneged on its deal to buy 12 French-built submarines in favour of a tech-sharing deal with the US and UK.

Paris has also encouraged the EU’s most senior official to walk out of trade negotiations with Canberra as a result of the submersible snub.

Officials fear that a number of concessions brokered with Washington in recent weeks could be lost if they are not announced at the EU-US talks as planned in Pittsburgh on September 29, according to the Politico news website.

A source said: “The stakes are high.”

The Netherlands, Belgium, Denmark and Ireland have all defied French opposition to call for the talks to go ahead as planned.

EU Commission vice-president Valdis Dombrovskis said no formal decision had been taken on whether to confirm the meeting.

“No operational decisions were taken at the College meeting concerning this topic,” the EU’s trade chief told reporters.

He added: “The President has expressed the College’s position very clearly in her media interventions.

France responded furiously to the announcement of the AUKUS military pact between the UK, US and Australia.

Paris recalled its ambassadors from Canberra and Washington and lobbied the EU to cut ties with the two countries.

The anger was a result of Australia cancelling its £48billion contract to buy diesel-electric submarines from France.

But Mr Macron has since agreed to return his ambassador to the US after a phone call with his US counterpart Joe Biden.

The US President vowed to keep Paris in the loop of key future defence decisions in the Indo-Pacific region.

In a joint statement, they said: “The two leaders agreed that the situation would have benefited from open consultations among allies on matters of strategic interest to France and our European partners. President Biden conveyed his ongoing commitment in that regard.”

It added: “The two leaders have decided to open a process of in-depth consultations, aimed at creating the conditions for ensuring confidence and proposing concrete measures toward common objectives … President Biden reaffirms the strategic importance of French and European engagement in the Indo-Pacific region.”

It came after Prime Minister Boris Johnson told Mr Macron to “donnez moi un break” – give me a break – after days of French fury.

Johnson tells Macron to 'get a grip' over Aukus submarine deal

He said the French President needs to “get a grip” and calm down about the military pact between the UK, US and Australia.

Despite Mr Macron’s diplomatic onslaught, Australia and America have shown no signs of reversing their decision to work together on building nuclear-powered submarines.

Alongside the UK, they will focus on military capability, separating it from the Five Eyes intelligence-sharing alliance which also includes New Zealand and Canada.

While Australia’s submarines are the main plank, AUKUS will also involve the sharing of cyber capabilities and undersea tech.

Mr Johnson has admitted he has not yet discussed the deal with Mr Macron yet.

Speaking to reporters on the train travelling from Washington DC to New York, Mr Johnson said: “We love the French. It’s just one of those things – there are no easy ways of having these conversations.

It’s a very human thing to delay the conversation until the last possible moment.

“I don’t know if anyone has been in that situation in their emotional life, but it’s very human to put it off.”