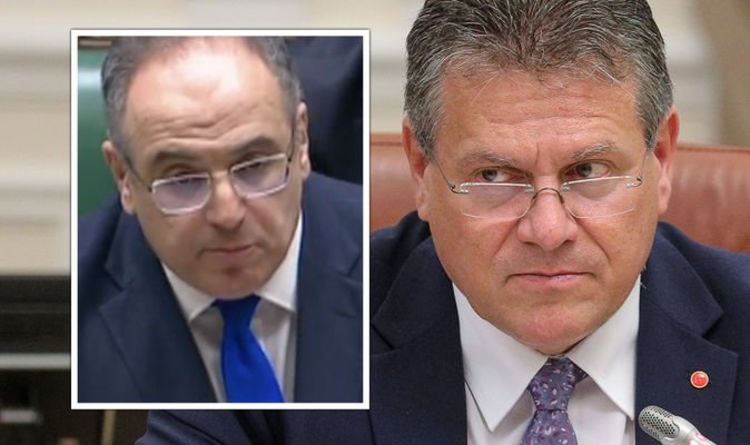 Paymaster General Michael Ellis criticised the EU’s excessive implementation of bureaucratic customs checks as he renewed the Government’s push to renegotiate the Protocol. He said the UK had worked in “good faith” to try and make the mechanism work but the problems were too great.

Mr Ellis highlighted damning statistics about the EU’s heavy-handed approach to the Protocol as he spoke on the issue in the Commons.

“The Northern Ireland executive noted that from January to March, about 20 percent of all of the European Union’s checks were being conducted in respect of Northern Ireland.

“That’s even though Northern Ireland’s population is just 0.5 percent of the EU as a whole.”

The minister described the current system as “unacceptable”.

Under the terms of the Brexit withdrawal agreement signed in 2019, customs checks are carried out on goods travelling from the UK to Northern Ireland.

In order to protect the Good Friday Agreement, it was negotiated that checks would happen in the Irish Sea to avoid a hard border on the island of Ireland.

But Unionists have accused the deal of having a detrimental impact on the UK’s internal market and of causing supply issues in the province.

In July the UK published its plan to renegotiate the terms of the Protocol to make it more sustainable in the long run.

Mr Ellis said this morning: “As we set out in our July command paper, the Protocol is not meeting its core objectives as it stands and is causing considerable disruption to lives and livelihoods.

“That is why we need to find a new balance through significant changes to the Northern Ireland Protocol and we are working intensively to that end.”

She asked if the minister was concerned the issues surrounding the Protocol came from the withdrawal agreement “that his Prime Minister negotiated as part of his Brexit plan”.

Taking aim at Boris Johnson’s claim in the 2019 election that he had an “oven-ready Brexit deal”, she taunted: “Surely this is a case of the deal may have been oven-ready but did someone forget to turn the gas on?”

Mr Ellis told the Labour MP “she ought to focus” on the customs checks imposed by Brussels.

The EU has so far refused the UK’s demand to renegotiate the Protocol.

European Commission Vice President, Marcos Sefcovic said the EU would be “creative” in finding a solution but that the Protocol had to remain.

“Failing to apply the Protocol will not make problems disappear but will simply take away the tools to solve them,” he said.

“I believe we can find the solutions within the Protocol.”