Home » Politics » Even the Church turns on Boris! Archbishop of Canterbury admits ‘disappointment’ 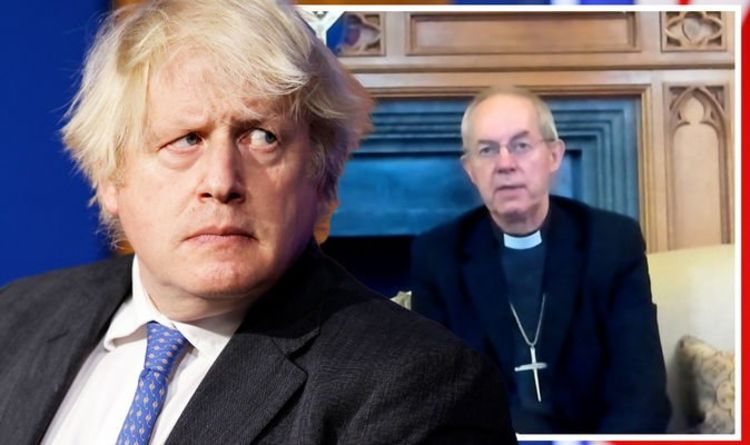 The intervention from Justin Welby comes as the Prime Minister continues to struggle with backlash over claims of alcohol-fuelled gathering in Downing Street last year. Last night the Conservatives lost the North Shropshire by-election, with allegations of illegal get-togethers in Government largely blamed.

The Liberal Democrats overturned a majority of over 22,000 to take the seat.

A number of alleged parties in Downing Street are currently under investigation, and the Conservatives have been forced to admit two members of staff were disciplined after an illegal gathering at their headquartered last November.

Mr Bailey has since stepped down from his position as chair of the London Assembly policing committee.

In an interview for the BBC’s Newscast podcast, the Archbishop said of the party: “I notice the former mayoral candidate immediately stepped down. Well, that seems very honourable.

“That seems to me to be an honourable and proper way of doing it.

“Everyone gets things wrong.”

While he would not be drawn on accusations Mr Johnson was aware of lockdown breaking parties in No10, he added it is “clearly essential” there is a culture of honesty should come from the Government.

“Secondly, there’s an investigation going on.

DON’T MISS:
North Shropshire ‘fed up’ of being taken for granted by Tories [REACTION]
Boris hit with new warning – even bigger crisis to engulf PM in weeks [INSIGHT]
Boris Johnson crushed: PM on the brink as Tories plot to oust leader [ANALYSIS]

“I won’t pre-judge that but we need to set an example,” he said.

“On a human level, I, just disappointed, really.

“I make so many mistakes myself, I’m not a big one for throwing stones.

“I don’t really do much on judging people, but we must obey the rules.

“We have to depersonalise it, let’s get away from that example, and I’d say: ‘Obey the rules, stick to the rules.”‘

The Prime Minister admitted this afternoon he needs to “fix” issues like the reported Number 10 parties to regain the trust of the public following yesterday’s by-election loss.

“Those questions are exactly the kind of questions about politics and politicians and all those kind of things, the running of government, that I’m going to have to fix of course,” he said.

“But the real issue people want to focus on is what we’re doing to sort out the NHS, the investment we are putting in to get us through a very tough time and what we are doing to tackle the pandemic.”