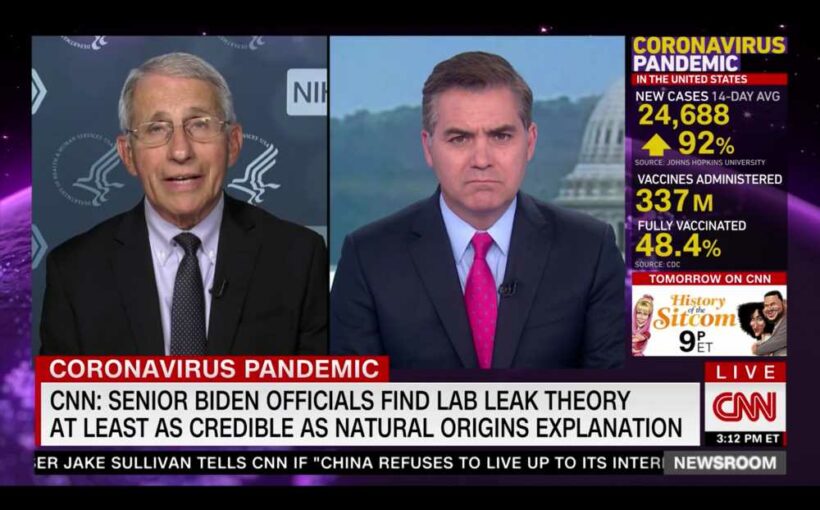 With new reports from both the World Health Organization and Biden administration officials expressing the need for a more definitive explanation regarding the origins of the coronavirus, the president’s chief medical adviser, Anthony Fauci, was asked if his thinking has changed on the controversial topic.

After saying that he’s keeping an “open mind” until something is proven, either way, Fauci said that he and other experts in the field believe Covid-19 was “most likely” first transmitted via natural origins, meaning from animal to human and was not created and leaked from a lab.

“The most likely explanation is a natural evolution from an animal reservoir to a human,” Fauci told CNN’s Jim Acosta on Saturday. “Once you say that, which I believe is the more likely , you’ve got to make sure you emphasize that you still keep an open mind for all possibilities, including a lab leak.”

Fauci cited a recent study released by “internationally-respected virologists and evolutionary biologists” that said the more likely explanation for the virus’ beginnings was from a “natural evolution from an animal host to a human.”

These remarks from the director of the National Institute of Allergy and Infectious Diseases follow a CNN report this week where top Biden administration officials who are overseeing an intelligence review on the virus’ origins said that the accidental “lab leak” theory from Wuhan China is just as credible as the theory of natural origin.

Additionally, on Friday, the World Health Organization recommended a second phase of studies into the origins of the virus. The organization also acknowledged its “premature push” to rule out the “lab leak” theory was a mistake.

“I was a lab technician myself, I’m an immunologist, and I have worked in the lab, and lab accidents happen,” WHO Director-General Tedros Adhanom Ghebreyesus said. “It’s common.”

Tedros said WHO expects China to cooperate with a new investigation.

“Finding the origins of this virus is a scientific exercise that must be kept free from politics. For that to happen, we expect China to support this next phase of the scientific process by sharing all relevant data in a spirit of transparency,” Tedros said.

But Dr. Matthew M. Kavanagh, director of the Global Health Policy & Politics Initiative at Georgetown University told Rolling Stone earlier this month that Biden’s use of the intelligence community, and not health officials, may have already politicized the matter.

Kavanagh said that if the aim of Biden’s report was to find a scientific explanation of the origins of Covid-19, he would have tasked the CDC or NIH with it, instead of U.S. intelligence agencies.

“This tells us that this is a political and an intelligence story: not a story mostly about science,” Kavanagh said. “And so we should understand the picture in that sense, and not be naive about it. We’re in a place where politics is driving people’s scientific understanding in a dangerous way.”