Climate activists dissatisfied with President Biden’s climate plan are not-so-subtly expressing their displeasure, as they are literally calling “bull—-” while dumping cow manure in front of the White House.

The demonstration, which began Thursday morning, was being conducted by Extinction Rebellion, an organization that pushes for “non-violent direct action and civil disobedience” to pressure government to “act justly” when it comes to climate and the environment.

“Net zero by 2030 and other not in my term of office scams are far too little, far too late,” Extinction Rebellion spokesperson Reilly Polka said in a statement. “Biden is punting the crisis to future generations with targets that rely on unproven technologies sucking carbon out of the atmosphere. This is a massive gamble to take when the well-being of the human species and the richness of life on earth is at stake. If he cared he’d set targets that expire while he’s still in office. We can’t keep waiting, we need change now.”

Fox News reached out to the White House for comment but they did not immediately respond.

Demonstrators could be heard chanting “Bull—-” and “No more climate crisis” while marching down the street with wheelbarrows full of dung. They eventually unloaded their cargo in front of the White House. 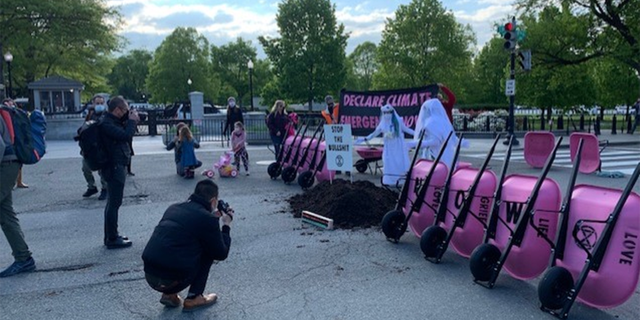 The group is calling for Biden to declare a climate and ecological emergency, and to set up a citizens’ assembly to determine how to achieve a net-zero emissions target of 2025. Until that happens, they said they will “will continue to escalate acts of non-violent civil disobedience against a criminal government that is failing its duty of care to its people.”