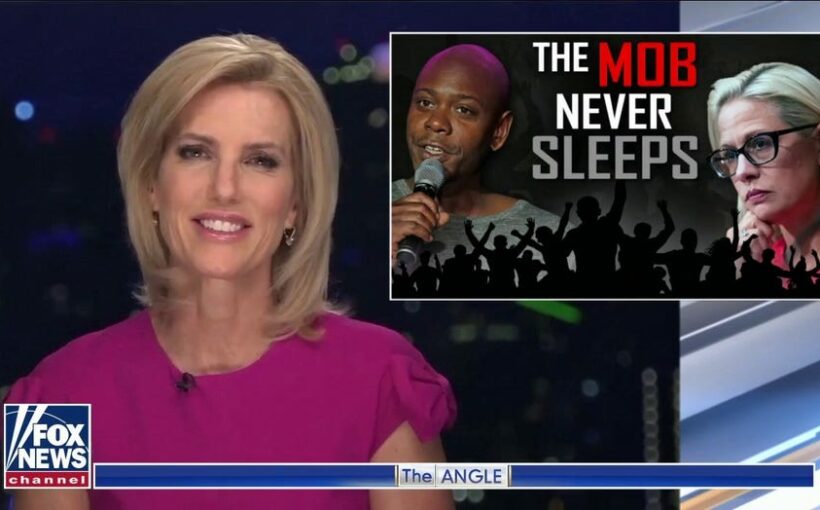 Host Laura Ingraham sounds off on ‘The Ingraham Angle’

Activists have accosted Sen. Kyrsten Sinema, D-Ariz., at an airport and on her way to the bathroom. They also plan to follow her at the Boston Marathon Monday, pressuring her to support President Biden’s $3.5 trillion reconciliation bill, the Build Back Better Act.

Activists from the Green New Deal Network, a coalition of 15 organizations, plan on “bird-dogging” Sinema during the marathon, the organization announced in a press release, according to The Boston Globe.

“Hi, Senator Sinema? I want to ask if you can explain to the American people what you’re planning on cutting from Joe Biden’s ‘Build Back Better’ plan?” Ojha asked while Sinema attempted to have a phone conversation.

While Sinema was at an airport, a Consideration of Deferred Action for Childhood Arrivals (DACA) recipient named Karina approached the senator, asking if she would commit to a pathway to citizenship for immigrants.

“Can you commit to that, senator?” Karina asked, later adding, “I don’t want to disturb you, but at the same time, I just want to know if I can get a commitment from you, senator.”

Sinema sought to ignore the activists.

Earlier in the week, immigration activists followed Sinema from the classroom where she teaches at Arizona State University to a bathroom, demanding that the senator support a “pathway to citizenship.” They continued hounding her while she was in the stall and later when she emerged to wash her hands.

Sinema has expressed her opposition to the Build Back Better Bill, which Democrats have often paired with a $1 trillion bipartisan infrastructure bill with Republican support. Sinema and her colleague, Sen. Joe Manchin, D-W.Va., have balked at the $3.5 trillion sticker price, which The Wall Street Journal editorial board has insisted is a low estimate of the bill’s true cost of $5 trillion. Biden and his advisors, meanwhile, have insisted that the cost is “zero” because they pledge to pay for the $3.5 trillion with tax increases on the wealthy and corporations.

Biden addressed the confrontations against the senators last week, noting that neither senator has Secret Service protection.

“I don’t think they’re appropriate tactics, but it happens to everybody,” Biden said.

“The only people it doesn’t happen to are the people who have Secret Service standing around them,” Biden added. “So, it’s part of the process.”

The Green New Deal Network did not immediately respond to Fox News’ request for comment.