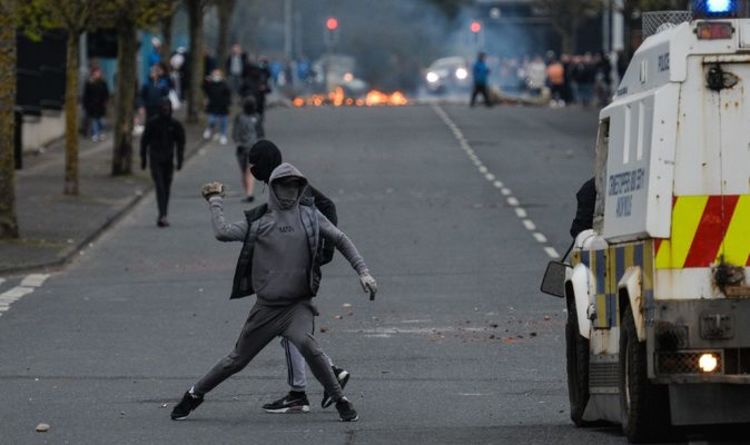 Northern Ireland faces “conflict on the streets” if talks between the European Union and the UK to iron out post-Brexit arrangements are not successful according to Sir Ivan. LBC presenter asked the former UK Permanent Representative to the EU if Northern Ireland may become a “serious political problem” for Boris Johnson’s Government if neither London nor Brussels back down, to which Sir Ivan replied both sides were indeed heading to “another major crisis.”

LBC host Matt Frei asked former UK Permanent Representative to the EU: “Is Northern Ireland going to become a really serious political problem, I mean, conflict on the streets. If this isn’t sorted out?”

“Yes, I think it would,” replied Sir Ivan.

“I think it’s essentially sorted out and both sides need to work together over the next few weeks but I do think we’ll have another major crisis, probably the side of Christmas.

“Because the two sides are still very far apart in their conceptions of what the end game.”

JUST IN: Brexit: Boris could be set to compromise with EU over ECJ role

It comes after EU Commission vice president Maros Sefcovic has announced the bloc is willing to drop a huge swathe of red tape currently holding up Northern Ireland trade.

The move marks a major concession from the EU Commission on the Brexit protocol and would see the vast majority of restrictions on the flow of animal goods in and out of Northern Ireland lifted.

Mr Sefcovic told a press conference in Brussels on October 13 that the EU had agreed to a “80 percent reduction of checks and controls required” for diary and meat goods for sale in Northern Ireland.

He said: “Let me illustrate what this means, imagine you are a Northern Ireland business importing products of animal origin like yogurts, cheese, or chickens from Great Britain.

Brexit: UK has put itself in a strong position says Tim Groser

“More than 80 percent of the identity and physical checks previously required will now be removed.

“This will significantly use the process for bringing food supplies from Great Britain to Northern Ireland.”

He continued: “Similarly a lorry transporting different food products like dairy, meat, fish, fruit and vegetables from Great Britain to supermarkets in Northern Ireland will now just need one certificate stating all goods of different types, class or description meet the requirement of EU legislation.”

However, Mr Sefcovic refused to budge over the role of the European Court of Justice as the final arbiter in alleged breaches of the protocol.

Since then Commission vice-president Maros Sefcovic and British Brexit Minister David Frost have met in Brussels to discuss a solution.

In a statement after Frost-Sefcovic meeting a week ago, the British government said it would discuss the EU proposals constructively and in a positive spirit.

However, Frost repeated the British view that significant changes are still required to the current arrangements, including on governance.