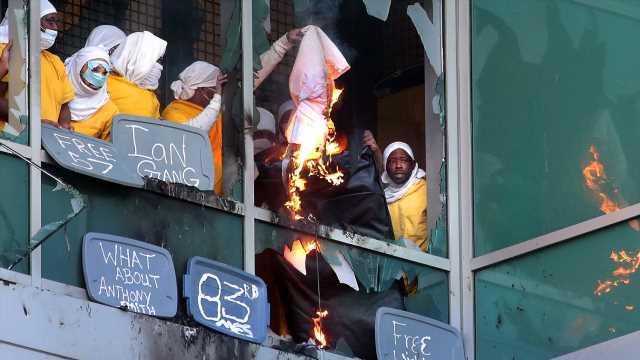 Rep. Cori Bush, D-Mo., is facing criticism for her reaction to a riot Saturday at a downtown St. Louis jail.

Inmates rioted over a variety of concerns, setting fires, smashing windows and throwing debris to the street below. It took corrections officers almost eight hours to end the “extremely violent” disturbance.

But the Missouri congresswoman tweeted a statement of support for the rioters, saying she would work to address their grievances, which include safety fears due to the coronavirus pandemic.

“I want to talk to my constituents in the window,” Bush tweeted, referring to the inmates. “Their lives and their rights must be protected. My team and I are working to ensure that the urgent needs of people who are incarcerated are not ignored.”

A quote from Martin Luther King, Jr. that Bush included in her tweet also raised some eyebrows: “A riot is the language of the unheard.”

Bush’s comments drew a polarized response, with some thanking Bush for “listening” and for “not forgetting” about her constituents behind bars.

Some even outright said they agreed with Bush’s sentiment.

Others, however, felt her words did not ring the same tone following the deadly U.S. Capitol riot on Jan. 6. Bush said that “our country deserves better” after accusing President Donald Trump of inciting the violence.

While the sacking of the Capitol has been widely condemned, some people criticized Bush for accepting the St. Louis mayhem.

TRUMP IMPEACHMENT IS ‘PARTISAN FARCE,’ SCHUMER WOULD DESERVE TO BE IMPEACHED TOO: RAND PAUL

“I think that argument fell out of favor about 32 days ago …,” Will Truman of the Ordinary Times tweeted about Bush’s remarks, drawing a comparison to the Capitol riot.

“Exactly a month ago you were saying riots were dangerous and a threat to democracy,” tweeted another user. “Good to know that riots are OK now.”