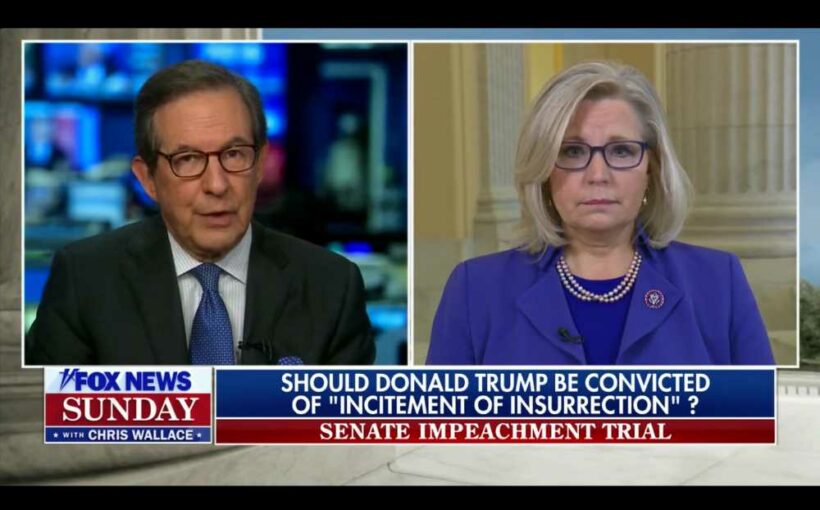 The day after the Wyoming Republican party voted to censure Congresswoman Liz Cheney over her vote to impeach Trump, Cheney went on Fox News and made it clear that she is not backing down on her criticism of the former president.

Fox News Sunday host, Chris Wallace, asked the Wyoming representative if she planned to step down after her state’s party voted to censure her. Cheney said no such plans and then proceeded to rip former president Trump while explaining her support of impeachment.

Cheney called out the falsehood that Black Lives Matter or antifa played a part in the insurrection and placed the blame at Trump’s feet.

“People in the [Republican] party are mistaken. They believe that BLM and Antifa were behind what happened here at the Capitol, that’s just simply not the case. It’s not true. And we’re going to have a lot of work we have to do. People have been lied to,” the congresswoman said.

Cheney tore into Trump, saying presidents who act like him are the “single greatest threat to our republic.”

Biden: 'No Need' for 'Erratic' Trump To Receive Intelligence Briefings

Grateful Dead Albums: The Best of the Rest

“We will not forget what happened on January 6th. And that the single greatest threat to our republic is a president who would put his own self-interest above the Constitution, above the national interest.”

The congresswoman said it was Trump who tried to steal the election and that his lies led to the deadly day at the Capitol last month.

“We’ve had a situation where President Trump claimed for months that the election was stolen and then apparently set about to do everything he could to steal it himself,” Cheney said. “And that ended up in an attack on the Capitol. Five people killed that day. That’s the kind of attack that can never happen again.”

The Wyoming representative also floated the idea that one of Trump’s tweets sent “while the attack was underway” calling then vice president Mike Pence a coward may have been “a premeditated effort to provoke violence.”

“The Senate [impeachment] trial is a snapshot. There is a massive criminal investigation underway. There will be a massive criminal investigation of everything that happened on January 6th and in the days before,” Cheney continued, “People will want to know exactly what the president was doing. They will want to know, for example, whether the tweet that he sent out calling Vice President Pence a coward while the attack was underway—whether that tweet, for example, was a premeditated effort to provoke violence… There will be many, many criminal investigations looking at every aspect of this that everyone who was involved, as there should be.”

Cheney’s called Trump’s actions “an assault” and wrapped things up by saying if the Republicans want to win again they “should not be embracing the former president.”

“We have never seen that kind of an assault by a president of the United States on another branch of government, and that can never happen again,” Cheney said.