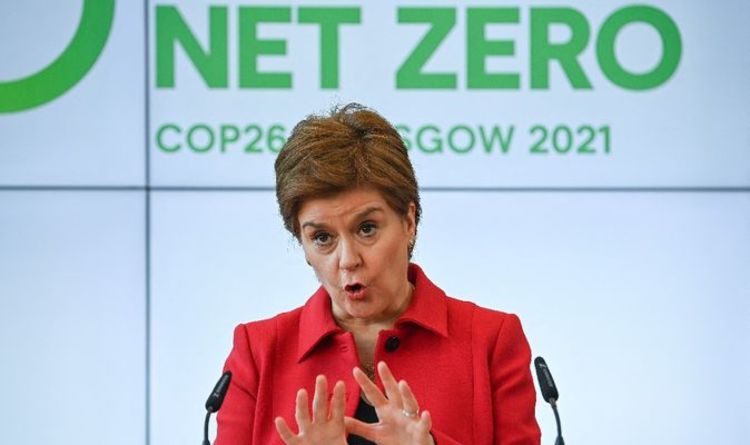 The SNP released adverts aimed at world leaders visiting Glasgow for the climate summit, that called Scotland “a nation in waiting”. The ads, which were paid for by the SNP rather than the Government, also described Scotland as “not yet an independent nation”. The First Minister will face a grilling in Holyrood today from the opposition parties who argue using the climate change disaster to further her own ambitions has been entirely inappropriate.

Ms Sturgeon claims they had merely been “welcoming people to Scotland” but opposition parties have urged her to withdraw them.

“We had adverts in a couple of newspapers welcoming people to Scotland. I think there is a difference.

“This conference is about climate change, and I don’t think anybody hearing or listening or speaking to me over the course of yesterday and today would think I’m focused on anything other than that.”

Ed Davey, leader of the Liberal Democrats, has slammed the Scottish Greens for hijacking the COP26 climate summit to push their ambition for an independent Scotland.

Patrick Harvie, co-leader of the Scottish Greens, told The National he would use the United Nations climate change summit to raise the issue of an independent Scotland with politicians from Europe and across the world.

Speaking to Express.co.uk, Mr Davey said: “The Greens talk a good game about our keeping our environment clean and saving the planet but in reality all they want to do is split up our family of nations.

“Nicola Sturgeon must be overjoyed at how enthusiastically the Green party has embraced its role as apologists for the SNP.

“Their government has just missed its crucial climate targets again, these so-called Greens have a laser focus on nationalism.

“No political party should be using COP to advance their own nationalist agenda.”