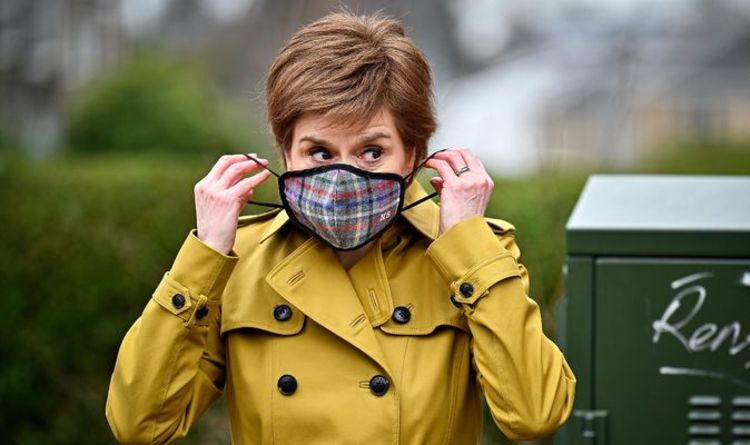 Epidemiologist Professor Mark Woolhouse urged the First Minister to rule out another “hugely damaging” lockdown amid climbing Omicron infections. Reflecting on the lockdown response to climbing cases in March 2020 and January 2021, he said it was a “lazy solution to a novel coronavirus epidemic” and “hugely damaging”. Instead of sweeping curbs on public life, he suggested a lighter-touch approach similar to that seen in Sweden.

The Omicron variant has been spreading rapidly across the UK, with cases in Scotland exceeding 20,000 for the first time today.

Despite soaring cases, hospitalisations have so far remained relatively stable, suggesting the Omicron variant is less severe than previous strains.

In light of the latest data, Professor Woolhouse said: “There is still no good case for a full lockdown.

“If we end up there again, it will be because we didn’t get the public health messaging right, because we failed to protect the vulnerable and didn’t order enough test kits.

“That’s something which should have been attended to when it was obvious that Omicron would cause a huge surge in cases.”

The First Minister has urged people to “stay at home as much as possible” while infections remain high.

The cancellation of large public gatherings included the Hogmanay celebrations planned for Edinburgh which usually attracts tens of thousands of people.

Ms Sturgeon will give an update on the COVID-19 situation to MSPs at 2pm Wednesday 4 when Holyrood reconvenes virtually, despite the house still being in recess.

He said: “I hope we can get away without anything too dramatic on top of what we’ve already done.

“I’m very conscious that there are people in the economic advice space, the mental health advice, the social policy, the education, of course, and those who have businesses and employees who have taken a hit in the few weeks leading up to Christmas.

He said that by March 2020 Brits had already been “reducing their contacts with each other as cases rose and before lockdown was imposed”.

He continued: “That, coupled with Covid-safe measures, such as masks and testing, would have been sufficient to control spread.

“We did serious harm to our children and young adults, who were robbed of their education, jobs and normal existence as well as suffering damage to their future prospects.

“All this to protect the NHS from a disease that is a far, far greater threat to the elderly, frail and infirm than the young and healthy.”

Ahead of the First Minister’s announcement, it is not known if any further changes will be made to curbs on large events, nightclubs and pubs which were originally due to last until January 17.