Thanks to the American Rescue Plan, the federal government is now spending $1.9 trillion to fight COVID-19 and to help the public get through the pandemic. A big chunk of that money is going to direct cash payments, upgrades to the Affordable Care Act and a “child allowance” that progressives have been talking up for years.

It’s a remarkable accomplishment, given how difficult launching new government programs has been for the past few decades, and suggests that we may be on the cusp of a new political era friendlier to such initiatives. No less a lefty hero than Sen. Bernie Sanders (I-Vt.) is calling it “the most significant piece of legislation to benefit working families in the modern history of this country.”

But the achievement comes with an asterisk: The relief measures will end in two years. Making them permanent, as Biden and the Democrats hope to do, will require finding some combination of taxes and spending cuts to cover the ongoing costs. This was not something Biden and the Democrats had to do for the American Rescue Plan, because it had no offsets.

As for whether the relief program signals a change in the political environment, that too is unclear.

The American Rescue Plan could be the first in a series of big initiatives that eventually stirs memories of the New Deal and Great Society, touching everything from climate to the cost of college. Or it could be an isolated legislative accomplishment tied to the specific conditions of the pandemic ― a flicker of Democratic unity and progressive ambition that will die just as soon as the national emergency ends. 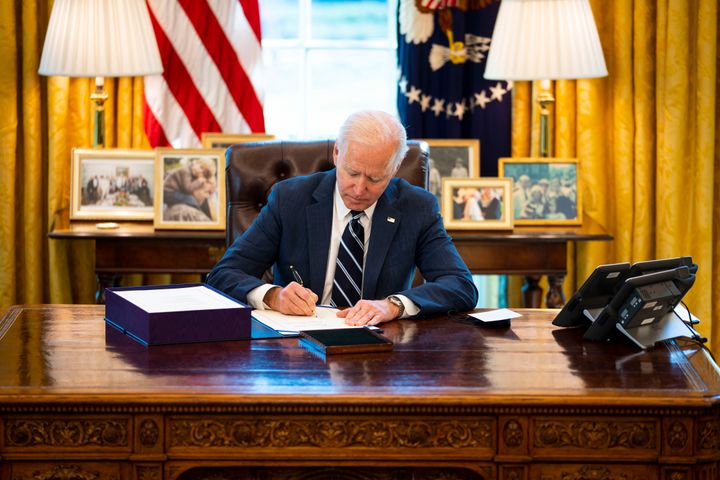 The last time Democrats were able to make far-reaching changes to the regulatory and welfare states was in the 1960s, under President Lyndon Johnson. The last two Democratic presidents, Bill Clinton and Barack Obama, had aspirations to enact similarly sweeping reforms. But the politics of the time wouldn’t allow it.

Enacting their agendas inevitably meant creating new programs, raising spending and the taxes to pay for it, and writing new regulations. In other words, their plans required more government. Faith in government had plummeted after the 1960s, when more than three in four Americans said they trusted the government “to do what is right” most or all of the time, according to polling from Pew Research. During both the Clinton and Obama presidencies, the figure hovered around one in four.

Scholars debate exactly why trust in government collapsed, but the list of contributing factors is clear enough. High-profile failures of policy or politicians, from Vietnam to Watergate, played a role. So did a lengthy, patient campaign to discredit the public sector by conservative financiers who wanted to roll back the taxes and regulations that limited corporate activity and used some of their personal wealth to finance government programs.

Race was also part of the story. The loss of faith in government corresponded with a shift of white voters away from the Democratic Party, following the Civil Rights revolution, with many saying they believed government programs helped African Americans at their expense. Ronald Reagan tapped into this sentiment, by using mythical “welfare queens” to justify his agenda of cutting federal programs. 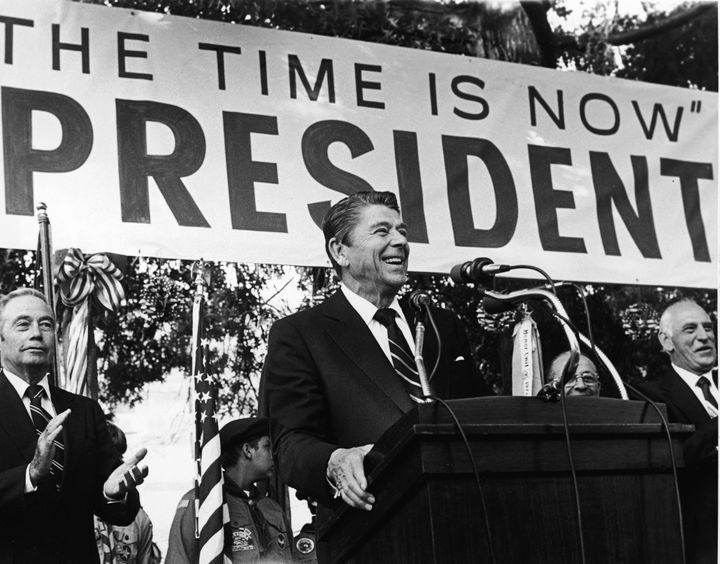 Reagan changed the terms of political debate, by winning two presidential elections (the second one by historic landslide) and doubling down on his anti-government rhetoric, including his famous quote that “The nine most terrifying words in the English language are: ‘I’m from the Government, and I’m here to help.’”

Democrats have mostly been on the defensive since then, trying desperately to enact their agenda in a hostile political environment. Clinton’s solution was to proclaim himself a “new Democrat” who blended the goals of the left with the means of the right, only to have most of his initiatives die in Congress. He largely retreated, focusing on incremental legislative victories, ultimately declaring that the “era of big government is over.”

Obama, sensing a renewed enthusiasm for bold action, vowed to think big again. And he saw more success, most notably with the Affordable Care Act. But Obama’s election triggered a new wave of racial panic among white voters, fueling opposition that let Republicans reclaim control of Congress in 2010. Obama spent most of his later presidency on the defensive, unable to pass anything more of similar scale.

Then came Donald Trump’s presidency, and two episodes that blew up the conservative narrative about government. The first was the GOP’s failed attempt to repeal “Obamacare,” which demonstrated public support for the program and provoked a backlash that helped Democrats recapture the House in 2018.

The second episode is still playing out: COVID-19. The pandemic simultaneously revealed the consequences of inadequate or incompetent government, especially during the early months when the Trump administration struggled to guarantee a supply of personal protective gear and other essential equipment.

The pandemic also showed what happens when the government acts, as it did with a series of relief measures while Trump was still president. Although far from perfect, these programs provided critical financial lifelines for Americans who lost their jobs. One estimate of the CARES Act, the March 2020 relief program, found that it likely kept 12 million people from falling into poverty.

Public Faith In Government Could Come Back

The overwhelming popularity of the American Rescue Plan, which polls suggest that even Republican voters support, probably has something to do with the success of the past relief measures ― and clear need for something more now. Families and businesses need the income support. State and local governments need funds to carry out mass vaccination and testing plans, to outfit schools for in-person learning and to build up public health infrastructure.

But the politics could change once the crisis and the crisis mentality pass, and Democrats are trying to find the funding to offset the cost of making the relief programs permanent. The 10-year cost, which is what Congress uses for its budgeting purposes, will likely fall somewhere between $1 and $2 trillion, based on estimates from the Center for a Responsible Federal Budget.

And it’s not like making those measures permanent is the only item on the Democratic agenda. Biden and his allies are promoting a massive infrastructure program that, hopefully, will include investments in green energy and other efforts to fight climate change. They want to make college more affordable, to create a paid leave program, to guarantee quality child care for any family that wants it and, one way or another, to continue to bolster the health care system. 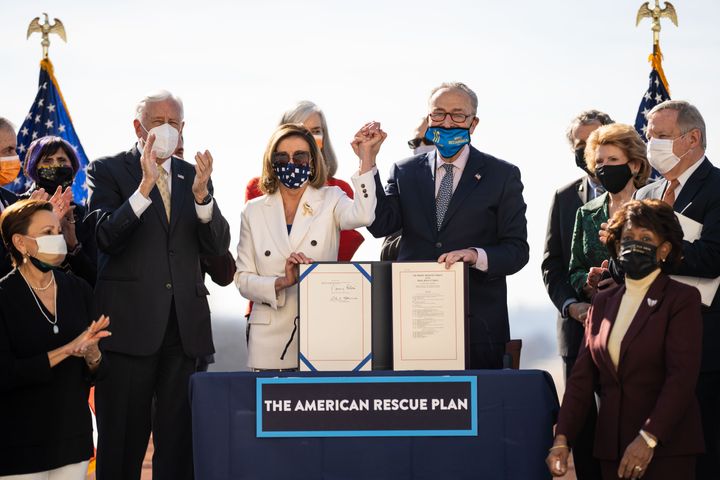 Biden can finance new initiatives through taxes on corporations and the wealthy, including rollbacks of tax cuts that Trump and the Republicans gave these groups. Biden’s campaign plan envisioned more than $3 trillion in new revenue, according to a series of estimates ― maybe not enough to cover everything on the Democratic agenda, but enough to cover quite a lot.

The question, as always, is whether Biden and the Democrats can find the votes, especially in the Senate, where they have just 50 members in the caucus. And even 50 votes isn’t enough to overcome a filibuster, which means Democrats either need to modify the filibuster so it can’t be a routine tool of obstruction or to keep using the budget reconciliation process, where a simple majority can pass legislation but complex rules limit what a bill can include.

It’s a more unified Senate caucus than Democrats have had in a long time, with relatively few of the conservative members from conservative states that limited what Clinton and, especially, Obama could do even with their party in control. But with no margin for error, the handful of exceptions, starting with West Virginia Democrat Joe Manchin, have plenty of leverage. They didn’t balk at the price tag of the American Rescue Plan, but that’s no guarantee they’ll be so supportive of other initiatives.

Individual items on the Democratic agenda, from new spending on infrastructure to help with college tuition, all poll well. And the pandemic has, if anything, strengthened support for new programs to help people with child care.

But answers to hypothetical survey questions do not always predict how the public will feel once legislation starts moving through Congress. Voters may not like the tradeoffs that detailed, formal analyses make apparent. And they may respond to conservative arguments, including those focusing on government waste and assistance for people who supposedly don’t deserve it.

There’s no way to know right now how these debates will turn out. There’s also no reason to think the outcome is predetermined. It will depend on a variety of factors, at least one of which is likely to be how well the COVID-19 relief initiatives actually delivers on its promise.

If a fully vaccinated, more financially secure public is close to resuming normal life in a few months, and if voters think the American Rescue Plan had something to do with that, they’re a lot more likely to endorse making its provisions permanent and to support new initiatives for the future.

They will believe in government once again because they’ve seen it work. Which perhaps is how it should be.