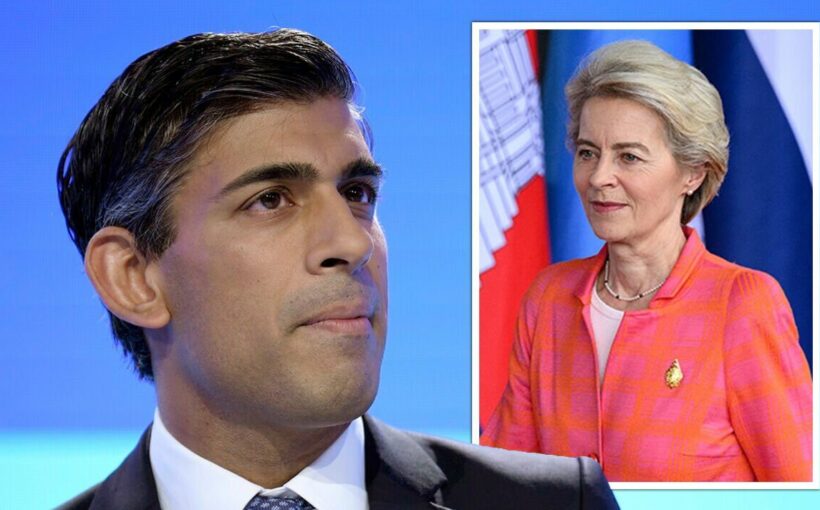 A new poll of Express.co.uk readers has found that over two-thirds think Prime Minister Rishi Sunak should pursue a no-deal Brexit. Mr Sunak has been encouraged to “revisit” the Brexit deal to forge closer ties with the European Union, six years after Britons voted to leave the bloc. The Tony Blair Institute for Global Change called for the UK Government to revise the Brexit deal when the current Trade and Cooperation Agreement (TCA) signed by former Prime Minister Boris Johnson is reviewed at the end of 2025.

Mr Johnson signed the Withdrawal Agreement after years of tense negotiations, with the EU-UK TCA coming into force at 11pm on December 31, 2020. The “Canada-style” deal positions the UK outside of the EU’s customs union and single market and allows for no tariffs or quotas enforce on trade. However, while the deal sort to settle the remaining differences, the Northern Ireland border remains a contentious issue as of yet to be resolved.

A report by the Sunday Times claimed earlier this month that senior Government figures were looking to form a Swiss-style relationship with the EU, but Downing Street denied this, saying it  was “categorically untrue”.

A Swiss-style Brexit could allow the UK selective access to the single market and remove trade barriers but would compromise some elements Brexiteers valued such as free movement, the jurisdiction of the European court and monetary contribution to Brussels.

Other options include a Norway-style model with membership to the European Economic Area (EEA) but while reducing trade barriers, the UK would have less influence in Brussels and still be required to make substantial contributions to the EU budget while allowing freedom of movement of goods, services, capital and people.

The most popular option among Express.co.uk readers is a no-deal Brexit which offers a clean break and an opportunity for Britain to establish new trade deals and rules.

In a poll that ran from 4pm on Tuesday, November 29 to 3.30pm on Wednesday, November 30, Express.co.uk asked readers: “Which sort of Brexit deal do you think Rishi Sunak should pursue?”

In the hundreds of comments left below the accompanying article, readers shared their thoughts on their preferred Brexit deal.

Many commented that the UK should have no deal with the EU, with username Grimreaper writing: “No deal, we don’t want anything to do with the EU.”

Username John Pettitt said: “We voted to leave which meant a no-deal.”

Another, username Michael Taylor wrote: “Well, it looks like the majority still want the deal we voted for. No deal.”

Username lordhorationelson said: “The majority voted to leave and that is what we should have done nowt else. No frills leave. No deal.”

And username SanjayP added: “No deal all the way. Any deal will means entanglement with the EU.”

While username ValBrooker said: “I have always advocated for ‘no deal’. This is because it takes all pressure off all parties involved to sign up for something detrimental and or half-baked.”

Other readers argued that the UK should keep or amend the deal rather than opt for a no-deal Brexit. Username SaraMay commented: “Not to have a trade deal with our nearest neighbours is crazy.”

Username dogglebird said: “I have no problem with us having a deal with the EU so long as we are not stuck under the jackboot of Brussels to any degree.”

And username EnglandAstern said of the TCA: “It’s a dreadful deal…but its one redeeming feature is that it’s better than no deal at all.”

However, some readers commented in favour of the UK rejoining the bloc, with username Lionking writing: “Dump Brexit completely, absolute disaster. Rejoin and get the best deal possible please and end this farce!”

A recent YouGov poll carried out between November 9 and 10 shows public support for Brexit at a record low with just 32 percent believing that leaving the EU was the right decision, compared to 56 percent.