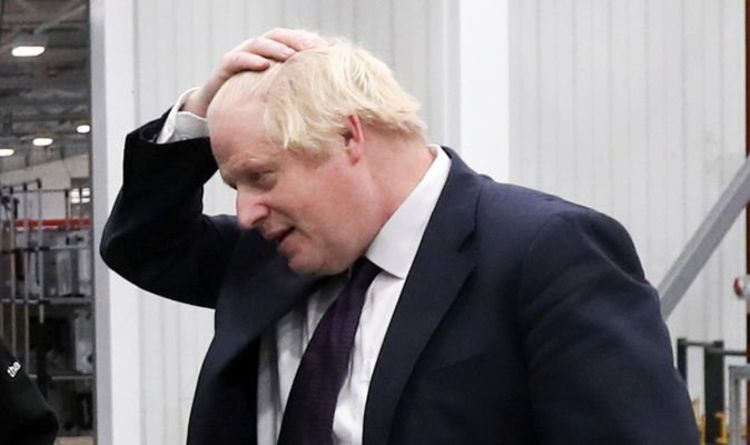 Boris Johnson mixes up his notes in CBI keynote speech

Furious backbenchers want their leader to take urgent action to regain control after being hit by a series of blunders, U-turns and accusations of broken promises. They fear a weak team surrounding the Prime Minister in Downing Street has left him vulnerable.

Chief of staff Dan Rosenfield is one of those facing the most pressure, with MPs fearing he is simply too inexperienced to help Mr Johnson avoid the traps ahead of him.

One Tory aide described him as “f***ing awful”, while a former minister told the MailOnline that the operation was being “run by teenagers”.

Earlier today, Jeremy Hunt, senior backbencher and former cabinet minister, was forced to concede “the last month has not been a good month” for the Prime Minister.

Another backbencher warned support for Mr Johnson was waning, as shown by empty spaces behind him in the Commons at Prime Minister’s Questions last week.

“I think the Prime Minister really needs to consider his position,” the MP said. “He needs to announce in January that he is going.

“He is a lovable clown, the problem is no-one is laughing anymore, are they?”

Meanwhile, a senior Downing Street source told the BBC: “There is a lot of concern inside the building about the PM.

“If they don’t insist, he just won’t do anything about it.”

In recent weeks, Mr Johnson has failed to stand by his promise on funding for the Northern Powerhouse Rail, broken manifesto commitments to stick with the state pension triple lock and not raise national insurance, and been forced to U-turn on attempts to overhaul the system that monitors MPs’ behaviour due to public backlash.

He was plunged into fresh crisis yesterday when he gave a gaffe-heavy speech to the Confederation of British Industry and suffered a wide-scale rebellion on a vote over social care reforms.

Mr Johnson lost his place in his speech, went off on a tangent about Peppa Pig and impersonated a car.

DON’T MISS:
Boris narrowly sees off revolt on cap on social care costs [IN DEPTH]
Boris Johnson butt of the joke on I’m A Celebrity as speech is mocked [WATCH]
Farage considers return to frontline politics in threat to the Tories [UPDATE]

So chaotic was the speech that a reporter asked him afterwards if “everything was okay”.

His official spokesman said today: “The Prime Minister briefly lost his place in a speech.

“He has given hundreds of speeches.

“I don’t think it’s unusual for people on rare occasions to lose their place in a speech.”

Later in the day, his social care plans only narrowly passed by 26 votes after 18 Tories rebelled and a further 68 did not vote.

No10 has sought to downplay the need for a shake-up in the Prime Minister’s top team.

His spokesman added: “The Prime Minister has an entire Cabinet to draw on who provide advice, as you would expect.”

He added: “The Prime Minister is very much focused on delivering for the public.”